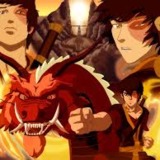 When comparing ATLA and LOK, critics of LOK often claim that, while bending in ATLA was incredibly intricate and complex, bending in LOK was overly simplified and simply benders "chucking the elements." While I can see how people might have started to get that idea from pro-bending, I believe that by the end of the series this idea should have been put to rest.

However, it seems that the idea that LOK bending is incredibly inferior to ATLA seems to have perpetuated. In this blog I'd like to do what I can to disprove that idea.

I'll be doing entries for all the elements.

First, firebending. LOK firebending's often accused of just being like kickboxing, all punches and nothing else. However there's some things wrong with this criticism.

It's not all fire whips and overly complex moves.

It's also incorrect to think that firebenders in LOK didn't have any fancier moves:

Both Mako and Korra (the two main firebenders in LOK) showed the ability to effectively use firebending to defend against other elements, mainly waterbending.

Azula's often praised for her use of fire jets, but Mako and Korra have both done the same thing repeatedly for enhanced mobility and maneuverability in combat.

Remember the fire daggers Zuko used in his first fight against Azula? They've got them in LOK too. Let's be honest, it was never particularly useful in combat, but it looks cool.

Zuko's breakdance move? LOK's got it too.

Just some random other moves that show firebenders doing things like ATLA, or doing things other than just punching fire.

I hope this was somewhat interesting and gets some discussion.

I'll be adding to this blog with sections for earth, water, and air as well. I just figured I'd start with fire.

Feel free to start discussing any of the elements-whether you agree/disagree with me, etc.

Any discussion would be helpful for me in writing up the sections on the other elements-so I know what kinds of things to try to include, etc. Also if there's anything to maybe be added to the fire section.

Next element up for discussion: earthbending.

When comparing ATLA and LOK earthbending, it is a bit easier to see some differences, and not acknowledging those would be a mistake. The prevalence of multiple subelements for earthbending (metalbending and lavabending) certainly added a new, more fluid aspect to earthbending. By the end of the series, all of the notable earthbenders in LOK also had a subelement, thus impacting their style and resulting in differences when compared to the pure earthbenders of ATLA. Probending also introduced some style changes to earthbending (though perhaps not as significant as it might appear at first), these being most notably exhibited by Bolin.

LOK probending sometimes gets criticized for supposedly changing too much about earthbending. Critics often cite Toph telling Aang that the key to earthbending was a firm stance, while Bolin told Korra that she needed a looser stance.

However, the rest of Bolin's advice to Korra is often overlooked. He's not saying a strong stance isn't important. He's saying that she needs to wait for the right moment to take that stance and strike.

"Well, technically, there are eighty-five, but let's just focus on the third. Neutral jing is the key to earthbending. It involves listening and waiting for the right moment to strike."-King Bumi

Sounds an awful lot like neutral jing. The only difference in probending is that earthbenders stay fluid and in motion during the waiting and listening part.

"Earthbenders, they step, a stone jumps out of the ground, they smack it, and WHAM, it goes flying."

This step, smack routine is a central element of Hung Gar style earthbending. And guess what? It's present in probending too.

As a final note: when Toph instructed Aang on his stance, she was teaching him to earthbend for the first time. Bolin, however, was teaching Korra how to modify her bendng style. Korra already knew how to earthbend, she already knew how to have a strong stance. We've seen Bumi, Aang, and Toph earthbend without being firmly rooted to the ground-while it's important for learning to earthbend, they're clear examples that earthbenders can modify their style to be less rooted. That's what probenders like Bolin do.

OK, on to a bending comparison. Usually LOK earthbenders get accused of just throwing rocks, sorta like firebending, rather than showing all the versatility of ATLA earthbenders. Sure, probending encourages a looser, more firebending-esque style of earthbending, so I can see where that idea would come in. But it's not like ATLA earthbenders never launched rocks at each other.

It would also be incorrect to say that LOK earthbenders never do anything except chuck rocks at each other.

Using earthbending to launch things or people into the air

Using the earth to trap people, by sinking them or encasing them

This would include the earth shield to attack maneuver

Wasn't really sure what to call this, but basically uprooting the earth or making a wave to knock opponents off balance

Bringing the earth up to strike an opponent

Using earthbending to propel yourself into the air

Just as described in the Avatar: Creating the Legend video on earthbending

Of course those are hardly the only examples, merely some examples.

In ATLA, Aang was the only airbender, and he was a high-caliber, native born airbender who used it as his primary element. In LOK, there's quite a few more airbenders, which naturally is going to result in more differences in use and technique. This can make airbending in LOK seem very different from ATLA, and in a sense it is. However, had there been more airbenders in ATLA, it seems very reasonable that we would have seen more differences in style, as is the case with the other elements.

Usually people don't seem to have too much of a problem with Tenzin or his kids' airbending. When it comes to Zaheer, his style is certainly different from more traditional airbending, but that was done intentionally. Zaheer wasn't meant to be a master airbender or even a classically trained one. Rather, he was supposed to be a master martial artist who knew enough about airbending to use it as a weapon, modifying it's use to fit his style of fighting-not the other way around. So while his technique is fairly unorthodox, it seems to be fairly well accepted.

The problem usually comes with Korra's airbending. People claim that she just uses it like firebending or the other elements, being too direct and aggressive. And, to be fair, there are some good reasons for that. Her first showing of airbending against Amon was just her punching air blasts.

In defense of her airbending against Amon-that was Korra's first time airbending, she was't supposed to have mastered it yet. In the heat of the moment she needed a quick, direct offense, and it makes sense that she would resort to more firebending-ish moves. So while I can see why people wouldn't like it, it's understandable imo.

However, before we go on, I think it's important to realize that LOK isn't the first time airbending and firebending have had similar moves. If you've got a problem with these similarities, the blame should really go back to book 1 of ATLA.

The similarities are pretty evident in Zuko and Aang's fights.

Nor is Korra limited to simply punching air. I think people sometimes miss Korra exhibiting a variety of airbending techniques or the philosophies of airbending into her fighting style.

Much like her water spouts, Korra is capable of forming air spouts for maneuverability and combat purposes. This is an advanced move even Aang never showed until the comics.

Korra can and does use airbending for more than just offense.

"The Ba Gua fighters are known for moving in a circle, constantly spinning back and forth."

While Korra's fighting style doesn't emphasize avoidance and evasion as much as Aang's, she can clearly be seen incorporating the circular movements of Ba Gua (the martial art that serves as a basis for airbending) into combat.

Just some random showings of versatility or other things.

Hope that's good for some discussion

Finally got around to finishing this.

LOK has no shortage of exceptionally skilled waterbenders, but even still it can be the subject of criticism, usually for being too direct or aggressive or...something.

Sure, waterbenidng's based on Tai Chi, softness and breath, I get all that. But it's not like ATLA waterbenders were never direct or aggressive

Water is the element of change. It's versatile, and it is not, nor should it be, always soft and gentle.

Nor were LOK benders limited to simply chucking water, kickboxing, etc. There was plenty of versatility straight from ATLA

One of the central principles of waterbending is using your opponent's attack against them, redirecting defense into offense. LOK waterbenders do this all the time

Katara demonstrated this technique rather frequently, and it's just as common in LOK

And do I really need to post gifs of Ming Hua?

This gets brought up a lot, I'm not entirely sure why. Aang and Katara each used it once, and never for actual fighting. It wasn't a particularly useful move.

Ming Hua, however, took the octopus form, modified it, and made it extremely effective, more than Aang or Katara ever did

Pakku was the only waterbender to really make use of waterspouts in ATLA. Korra does it often enough to practically be her signature move. Unalaq used the move as well

In ATLA, Katara used water surfing, ice ramps, and more to transport herself and others with waterbending. LOK has all of that too

Pretty straightforward, freezing an opponent: either a total flash freeze or just a partial freeze

May come back and add more, but this'll do for now. Let me know what you think