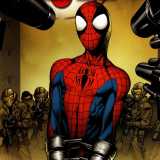 The Arach-Knight skitters lithely across a wall and onto a lightpost before lowering himself down behind the guy at the phone booth.

"Hey, chief," he says, tapping the stranger on the shoulder.  The guy, a salesman from Jersey, turns around.  It takes him a full ten seconds to fully register what it is he's seeing and when he does he shrieks like a little girl and whacks the Knight on the head with the phone before running off.  The Arach-Knight jumps to the ground, and rubs his noggin as he walks back over to you.

"I'm going to translate that man's girlish scream for you.  He basically said, no way, no how should you tell anyone who you are under that mask, and then the last part might be tougher to decipher, but I think he meant to say something like, Ahhh help me, there's a giant spider that wants to bite my head off and drink my blood!  I can't be sure though, the guy seemed a little high strung."