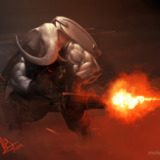 Hey, guys, help me out here. I am looking for artists who can sketch up some character concepts that I have for a comic book Un...

He is called many things. The saviour. The herald of change. The man who is going to bring about the end of an era. But who actually is he?

Long ago it has been foretold that Lord Kalki, the final re-incarnation of the Supreme of the Godheads, Lord Vishnu, shall appear when evil once again finds its highest sway. And that his arrival shall bring about the end of this generation, and start the Satyayug (the era of truth). Kalki is great, and powerful, and magnificent. He shall arrive riding on a glorious white steed, and he shall carry a sword forged by Vishnu himself. He shall vanquish the evils that beset man, and bring abou the greatest change conceivable.

But that's what the legends say. And the world has been waiting for a long time. But no one has come. It's the year 2013. And yet, no one has yet arrived. Several have claimed to be the one, but none is. What is the meaning of this? Is Lord Kalki's prophecy false? Or is he dead? Hunted down by the evil forces before he could rise?

Maybe he is nothing like what we think he is.

Maybe he is not the mighty prophet, but the silent philosopher who knows that man is so corrupt, that mankind can never be brought back from the precipice.

Maybe he is not the great soldier who fights for everybody.. Maybe he is the lonely warrior, operating from the shadows, performing his duties without letting anyone know..

Maybe he is not just a re-incarnation of God.. Maybe he is a man who is seeking his own redemption in the face of all that is evil..

Silent guardian. An all-watching protector, who sees, and is not seen. Who fights, yet the world is unaware of his existence. Or is it?

Nothing is known of Kalki's origin. His roots shall not be revealed just yet. Only before the events leading to a Dharmayudh (holy war) that his allies get to know who he is. The precise thing about him that his allies, the Protectors, know says nothing about his real identity, or his family. A man with enough wealth to shame the billionnaires of India, and with enough technology in his arsenal to make even the brightest of tech-whizes look helpless, Kalki is like that mysterious shadow. Nothing is known about how he has access to these resources, or how he maintains them. He is a ghost. No identity. No name. No home, except for a headquarters whose location is not known to anybody.

According to Lionheart (see my blog titled My Universe), Kalki was immediately identified by his parents, who were ardent Vaishnavs, courtsey of a peculiar birthmark-a holy symbol that covered his small body. It was the mark of Vishnu. Realising that he is Kalki, his parents (identities unknown, referred to as Mom and Father only) trained him, raised him both physically and mentally for his role. However, they died in the hands of "certain enemies", who realised that the re-incarnation of the Vishnu has to be protected. In a desperate attempt to save their child, and the world's hope, they sacrificed their own lives, and faked their son's death, so as to give him a chance to escape.

Kalki went out in the world, looking for answers. He knows his goal, but lacks conviction. He trains under the greatest masters and teachers, and learns almost every form of martial arts known to man. He trains all over the world, under teachers who teach him via different methods, with the objective being the same- to make him feel no pain, to harden his very soul, and to turn him into a machine that's soul aim is to fight evil. By the time Kalki reaches his mid twenties, he is already capable enough to defeat the very people who trained him. He goes on honing his skills to perfection, but still suffers from lack of faith, until he is instructed by a simple beggar to pray to the Gods to get comfort. Kalki starts meditating, and he interacts with the Godheads via telepathy, including Lord Vishnu. He informs Kalki that everything his parents raised him for are real, he indeed is Vishnu in mortal form. He tells him that everything in the multiverse happens by the will of the Godheads, and that Kalki is the supreme protector of this world. They provide him with invaluable knowledge, and also offer him superhuman powers to a certain degree. But Kalki politely declines, stating that he can do what he was born to do as a man only. Vishnu reveals that he is more than a man-a demi-god. If he is wounded, he shall get hurt, but he shall heal faster than an ordinary human. When he fights, he shall fight much better than the best if the humans. Vishnu tells him that he shall always be with Kalki, in his soul, and Kalki will always be in his vision. Blessing him for success, the Godheads cut off the telepathic link.

After this, Kalki gets his conviction back. He knows his purpose again, and he decides to start his war on evil hiding in the earth in every form, but not as anything the legends foretold-as something entirely different. Returning to his masters, he aqcuires the "keys to his resources", and he returns to his country. The legacy has begun.