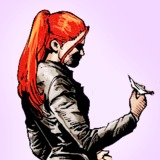 The Once and Forever Queen

Leadership is not about a title or a designation. It's about impact, influence and inspiration. Impact involves getting results, influence is about spreading the passion you have for your work, and you have to inspire team-mates and customers.

Following the example of Antonia Dain (and her predecessor Quintus Knightfall) in Gothic and other cities, and especially so by the success of her tactics & coordination during Amaranth's siege on the city, a number of Gothic's remaining citizens came together and assembled themselves into a group of vigilantes known as the Ebony Bouquet, [Often called "The Bouquet" or "The Roses" for short. An individual member is referred to as a Rose.] Originally a small operation formed to combat the increasing rate of crimes committed without response in a single neighborhood, the founders soon saw their ambitions spreading as well as their influence. Soon others began to act in turn, and before long a network of contacts was established and The Ebony Bouquet was formed.

Comprised of human and metahuman men and women who subscribe to neither extreme supremacist ideology, the members of the Ebony Bouquet dedicate themselves to all manner of general heroism including things from petty crimes, to stifling gang violence, to combating terrorist cells and supervillains.

The largest concentration of "Rosaledas," or Rose Beds (the name for each group's base of operations), is in Gothic City, but rumor has it the Roses are looking to capitalize on the string of copycats already influenced by the memetic legacy of The Noir Rose's, seeking to unite those singular forces (i.e. independent copycats and operators) in cells spread all across the nation.

They are not, to any knowledge, currently affiliated with Avalon or any of its subsidiaries.

The Roses, like those from whom they draw inspiration, operate both during the day and at night, and may travel singularly or in groups. Quick stealthy operations are their MO and they prefer to complete most missions as efficiently as possible and with minimal exposure and danger to themselves. For this reason most jobs are planned meticulously beforehand with a number of hacker-experienced or street-based members acting as their eyes and ears over the city. All of their members' identities are secret.

The Ebony Bouquet calls together persons of different backgrounds and abilities. Combat skill ranges from total beginner to well-versed in several arts and members may have their own personal modus operandi, including their own tools and weapons, or even their own jobs within the group. [S/he who is smart but lacks combat experience will not be forced into the field to fight, but may receive training for that if desired; someone probably won't be chosen for stealth if they have heavy footsteps or are clumsy; et cetera.]

While a far-cry from what Dain or Knightfall could manage with their respective resources, it is suspected that either the Roses are aided by a wealthy benefactor (perhaps more than one) or several of their members have funds enough to aid the group themselves out of pocket. A fact most find evidenced by the body armor they wear and gear they use, much of it strikingly similar in appearance and function to the true Noir Rose, if not lower-end variants. And by word of an anonymous tip, along with various photographs of Dain, they are often noted to use tasers themselves, most likely in her honor. Members of Ebony Bouquet are permitted to use guns and many will use lethal means to achieve their ends.

They operate primarily on charismatic authority, rather than traditional authority. As such, there is no functional leadership structure, except that in each active city there are groups of varying sizes that act as overseers, with the entire operation (as far as the official group is concerned) presided over by a single voice, anonymous, in Gothic City. Besides that, each member contributes as much as possible to the Bouquet, and if a particular member is more suited to lead a mission than any others, whether due to knowledge, experience, skill in a particular area, or any other factor, that person is designated leader of that operation.

Following a biological attack on Kamelot by a now somewhat infamous attention-seeking clown, Antonia Dain vanished from work and, seemingly, off the face of the Earth. No one close to her had seen nor heard from her since guiding Lena Dante to Quintus Knightfall’s secret location below Kamelot for debriefing on the Smiles situation. Although, briefly, she had managed to successfully sneak into the mortuary at Grace Memorial Hospital in order to obtain a blood sample from Herman Anto. Since that time, she had locked herself away in her own sort of private laboratory for studying.

Dressed from head to toe in the protective ivory suit, she wore a pair of goggles over her eyes and a surgical mask over the mouth. The lab was cluttered, even by her own standards, littered with a small number of suspended stiffened mouse corpses on various tables, microscopes, needles, and various other instruments for research. Each corpse had one thing in common: Vibrant green fur with pale skin undertones, and a slight to severe red coloration at the tiny lips of the creatures.

“This…is killing my vacation days,” she sarcastically murmured to herself whilst scribbling something in a pad littered with meticulously written and, if one looked from the outside, seemingly disorganized, notes. “It better be worth it.” In truth, she had forgotten to even call in sick or on vacation. The notes themselves detailed various trials of experiments with the chemical, measuring effects on the mice themselves, Antonia just then finishing an abridged summary of her findings.

Unidentified toxin found, extracted from subject(Herman Alto)’s blood. EXTREMELY small volume of toxin found per pint to be able to work with. Must acquire more for further study. Will need to meet with clown.

-Doses measured CAREFULLY by size of mouse subjects, equally concentrated amounts given to all.
-Isolated dubnium, extracted from doses given to control group. Not so for experimental.
-Following introduction, subjects exhibited behaviour similar to that of the original subject (Herman Alto) before assuming rigid posture and dying.
-Presence, or lack thereof, of dubnium shown to have no effect on toxin. Working conclusion: Inclusion of “Hahnium” was intended simply for its chemical symbol, Ha.**

Next logical move: Preparation for possible escape. Target has obsessive need for attention, will likely be compelled to announce departure from holding facilities, or otherwise leave a “present.” Frequency of biological attacks suggests likely to continue in future. Would allow for further study, potential synthesis of counter-measure (to be applied immediately upon signs of infection). – Consider preemptive strike. While risky, in potentially placing self on other side of law, murdering the attention-seeker would prevent further damage to society…Plan: Extract knowledge, conduct studies, terminate target.

While not totally necessary for one with her total recall, the notes would serve to ease explanation, should she choose to communicate studies and motives with anyone else. As for the moment, however, upon pain of having her own sanity and morals called into question, she opted to keep these secrets locked away for herself. Rolling the chair back from the desk, Antonia rose, closed the notebook, shut it up inside a locked desk drawer, and headed back up to change clothes and prepare to present her best case for why she should keep her job.