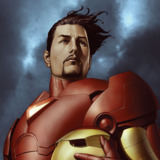 Due to the vastly increasing quantity of world ending threats known as "NGods", the Mechanical Merlin was forced to turn his creations once again, warlike. Despite his standard Annihilator Armor being capable of standing toe-to-toe with an NGod for a long time, perhaps even winning a fight, Anthony sought to do more than stand toe-to-toe, rather, become the boot which steps upon the ant. Stark believes everything is achievable through technology -- There are no limits.

Standing upright at a colossal 15 feet and weighing an even more enormous 3042 tons, the Godsbane is truly a heavy hitter unlike any suit Stark has ever created. Smartly constructed from a greatly enhanced version of Chobham, a classified armor used by the British army, this Chobham has been tampered to be extremely resistant to blunt force damage, and due to the resistance it affords, offers superior protection against many forms of offence (explosives and has a very good resistance against armor penetrating rounds, causing them to shatter upon impact.) During the second Iraq war in 2003, a Challenger 2 tank using a lesser version of Chobham became stuck in a ditch while fighting in Basra against Iraqi forces. The crew remained safe inside for many hours, the composite Chobham armour protecting them from enemy fire, including rocket propelled grenades without damage. Additionally, shock absorption technology has been ingeniously employed by Stark to absorb and redistribute the energy back into the system; effectively meaning the harder the suit is hit, the stronger it can hit back. The Godsbane also sees a highly complex system for the assistance of balance, maneuverability and spacial control.

--The Godsbane armor contains amplified versions of all weaponry and defenses found in the Annihilator Suit, save for a few differences--

A gift from Anu Khan, the Godbane armor has two one meter long retractable tempestium blades stored within his wrists. Tempestium and its odd properties make it an enviable weapon. It is noted to brutally attack the ATP in the muscles of New Gods and those of godlike physiology, passively weakening their bodies to the point of becoming more contestable prey for humanoid fighters. A cut from a blade made from tempestium is, therefore, understandably difficult to recover froffom. It seems to affect metahuman, mutant, enhanced human, alien, demonic, angelic, and other blockbusters of varied origins. Even normal humans are afflicted by the metal, but not to the degree that heavy hitters like those capable of lifting a superhuman amount unassisted would be. Humans require deep incisions by tempestium in order to start feeling the degrading effects. The blades are also able to be super-heated, maximizing their ability to cut through most armor like butter so the tempestium can inflict damage upon the flesh of foes.

Utilizing state of the art energy conversion technology, Anthony has managed to derive synthetic strength amplification in the form of converting energy taken from multiple arc reactors (miniature particle accelerators) within the large suit of armor and converting all of the energy into raw, superhuman strength. Speed-wise, the suit can work uncannily fast, further boosted by it's ability to utilize knee, elbow and shoulder mounted thrusting units to maximize the offensive output. The Godsbane armor could quite easily go toe-to-toe with the likes of Thee Champion or Kai Aurelius without faltering. At least, in Stark's opinion.

The Summit System is an international system which aids Stark in combat, providing him with an array of extra suit components or even utilizing a satellite-like beam of energy capable of being fired from space, with devastating effect. The Summit System is a single satellite disguised as a piece of tech from Peak International. It is a super-fast and effective system, being able to catapult new pieces of armor to Stark even before he has finished throwing a punch.

(To be updated, needed myself a Hulk Buster)

Premonition Vs Anthony_Stark - Closed RP - Stark Vs the President

Assassination Coronation - Stark is not a criminal anymore "mysteriously"

President Stark - The Oath of Office - Winning the Presidential Election

The Incarceration - Arresting Mercy Sheridan after during the fall of Kamelot