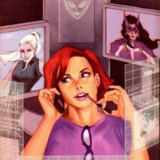 Dude, the GOTY Edition just came out and I believe it has most (if not all) of the DLCs. You don't have to purchase a thing...i think..

In Earth One he trains him how to fight, and the Gotham TV show took some inspiration from that.

Remember, Alfred is also an accomplished actor. I believe Alfred gave Bruce some acting lessons, and basically taught him how to be "Bruce Wayne, Billionaire Playboy" in terms of body language, mannerisms, voice tone etc... And since theatricality is also part of the Batman personae, I would assume Alfred also gave him pointers on that front as well.

I'm sure he also gave him some medical training in addition to what Bruce already knows.

Joe Manganiello has been cast as Deathstroke in Ben Affleck’s Batman movie!

DC Entertainment president and chief creative officer Geoff Johns confirmed the casting in an interview with The Wall Street Journal.

Ben Affleck’s Batman movie doesn’t have a release date yet, but Affleck is working on the script with Johns.

What do you think of Joe Manganiello as Deathstroke? Sound off in the comments below!

Only two words came to mind when I read this "F*CK YES!"

The dude is a beast, kinda looks like Slade, can easily pull off the character's badassery and overall physicality, and he matches up well with Ben Affleck's Batman! Can't Wait!

@jb681131: I wouldn't call Cesar Romero's Joker "ruthless" :P He did start off quite ruthless, but when the Bat-Mythos transitioned into Camp, the same applied to Joker. If I recall correctly, while Joker did mostly disappear from Batman comics in the 50's-60's before his re-introduction in 1973, the rare appearances he had, he was mostly a goofy, crazy yet harmless clown.

To answer your question, I have to address a certain misconception regarding the tonal shift in Batman comics in the 70's/80's.

A lot of people assume that Batman suddenly became dark because of the Killing Joke, The Dark Knight Returns, or even Year One, when in reality, Batman going dark was a work in progress that was starting in the early 70's. Before that, even though Batman stories were slowly starting to get darker mostly due to Denny O'Neil and Neal Adams, Batman himself in his portrayal went through several stages. For a while, Batman was seen as a celebrity who just so happens to fight crime, later on he would become a deputized citizen. It's really not until the 80's when he is portrayed as a vigilante, and finally Frank Miller introduced the concept of him being an urban myth, which stuck for many years. And now, mostly due to the Nolan movies, Batman is regarded as a symbol and a legend, the whole "more than a man" thing.

With all that said, what does that have to do with Joker. Well, you have to take into consideration that, for many years, Joker actually disappeared from Batman comics, and his big re-introduction came in 1973 in "The Joker's Five Way Revenge". He was cruel, sadistic, murderous and also had a certain complexity about him, when he refused to kill Batman when he had the chance because it was by chance, yet he still retained a certain cartoonish quality to him. Yet not long after that, stories like "Joker's Rumpus Room Revenge", in which Joker lures Batman into his playland where he intends to kill him with one of his carnival themed deathtraps, one of which includes A Joker looking Samurai popping out of a giant Jack-in-a-box...it is the sort of stories you would expect in the Silver Age Camp Era, yet that took place in 1981. So, Joker's portrayal was quite inconsistent during this era, he was either a ruthless psychotic killer with a sick sense of humor, or an over the top murdering clown. However, one story in particular that blurred the line between those two is the infamous "Laughing Fish", which I don't really consider a dark story, but it still had some dark moments here and there, and on paper, it's actually quite a ridiculous story, yet Joker was still quite ruthless in it.

So finally to answer your question, did the Killing Joke suddenly change Joker? Yes and No. No, because Joker was already dark and ruthless over a decade before TKJ. However, I can say Yes because it was in TKJ where Joker "went too far", and it was the darkest he has ever been in years. I would also add in A Death in the Family, as it was another story of Joker taking it too far. It just so happens that these two storylines took place not too far in between each other, so people started associating these extreme acts with how Joker's "norm" is now. But like Batman, Joker himself has gone through several phases, though less consistent and has flipped through those phases over the years, it's only in the more recent years, notably after The Dark Knight, where Joker has consistently been dark,

'The Joker: Death of the Family' is basically all the tie-ins to the main story, but you don't need to read them to understand the main story, which collects 14-17. Basically what it does is show you what's going on with the rest of the Batfamily during the events of the main story and how they end up where they are towards the end of the main story. In terms of quality, the Nightwing, Batgirl and Robin story are strong while the others are forgettable. The problem with these stories is that, none of the batfamily members get a proper payoff and resolution and the story only resolves in the main Batman title.

So basically what I'm saying is, if you want to read the main story, that takes place in the Batman new 52 Death of the Family volume (you can pick up the one with the transparent joker cover the one that shows the joker "mask"). The other collection doesn't collect the main Batman story, so you either collect the Batman volume or both books.

Go back to sleep and hope I wake up as Superman.

Interesting. I think Miles is a great character and worthy of his own animated movie. We've seen our classic Peter Parker Spider-Man many times in an animated series and he's about to make major waves in his own live action movie as part of the MCU, so I think it's cool to see Miles in his own movie, he could use the exposure, and as a character, I think he's more than capable of carrying his own movie. It'll be interesting to see if this movie will feature Peter Parker in any way or if it will only be Miles' story/

So according to a new rumor, JL Part 1 main villain isn't going to be Darkseid but Steppenwolf, who is Darkseid's uncle and one of his elite generals. In a deleted scene from BvS, he is teased. According to reports, Steppenwolf is going be the big bad in Part 1 and sets up Darkseid as the main villain for Part 2.

This concerns me a little bit simply because, if true, shows that WB has still not learned from their mistakes. One of BvS's issues was being too concerned with setting up future movies instead of telling its own story, and which made the overall storytelling messy. Now we learn that Part 1's main villain is basically just setting up the "real" villain for part 2...I'm taking this with a grain of salt for now and I really hope Snyder and co learn from their mistakes....

Does Steppenwolf as villain excite you?