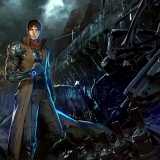 What was the Backstreet Project?

The Backstreet Project was


In February 2000, the Backstreet Boys join Stan Lee to create a comic book called the Backstreet Project, a small booklet, which was a segment of the huge merchandising device for the band and went on sale for eight dollars at their concerts or through Internet. The "Backstreet Project" was also created by Nick Carter, the youngest of the BSB, and Stan Lee, the creator of Spider Man, in which the BSB are super heroes.

It all starts as the Backstreet Boys are in the midst of another of his concerts, they are on stage when suddenly a spaceship crashes near stadium. The kids come running to help the beautiful alien, Zanell (the daughter of an evil alien emperor named Zator), who was on the ship and discover that the visitor was on the mission of protecting the Earth from an alien invasion would happen soon. The alien gives each one of the boys an enchanted amulet in the form of mystical crystals, when the Backstreet Boys use these amulets their DNA changed through genetic a virtual cyclone which gives each amazing powers.

Nick Cater/Ninja-Man: His charm makes it a martial arts expert of any kind. It has a magnificent sword whose blade can cut everything. Their movements make Jackie Chan look close to the ground.


Howie Dorough/Illusioneer: Using telepathic abilities that gives it its charm, he can project in images, three-dimensional illusions of any object imaginable. Just enough to appoint him to that he does appear.


A.J. McLean/Ordnance: With his charm he becomes the best shot no matter what weapon you are driving. It is armed by a pair of laser guns and moves with the grace of an Olympic Athlete.


Brian Littrell/Top Speed: His amulet allows you to jump heights never before achieved, even entire buildings jump with a jump. You can also generate a bunch of mystical energy of the shape of a basketball.


Kevin Richardson/Power Lord: His charm gives him the ability to grow and gain a unique force, can be as strong as a room full of weightlifters.