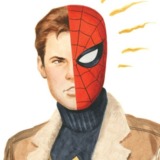 Looks great, can't wait! This issue got a bit delayed so it's nice to be less than a week away from it. lol

Nice, it's always fun to see Maestro. I don't really follow this book but I'll probably pick this up.

I... I didn't even know Betty and Veronica had a book currently. LOL I gotta get that

@watcher5000: Eh, still comes off wrong to me. They interacted more than fine in every other time they were together, and in this storyline you posted they were actually pretty close... In that specific scenario it made sense for Miles to do that, and even when he did it was after lots of tries to stop Peter and Tony from beating each other up, he had the right to be annoyed... (And frankly Peter and Tony were acting OOC/like children there, not their "regular" selves, even I was annoyed when I read it lol) Here it doesn't make sense, it's something so small and hardly negative. And here he isn't annoyed with Peter as a whole, just on how childish he's acting on that moment, this scene kinda looks like he can't stand him in general. But eh.

Btw I meant Spider-Man #2 in my previous post, not Spider-Men, I wasn't talking about when they first met. :p Glad you can see what I'm saying tho. I don't feel like arguing this back and forth anymore so I'd like to end it around here, thanks for the politeness, its not always I find that on this site. LOL

Why did Miles take his mask off in front of criminals? WTF is he thinking?

What? Miles is supposed to be the one spider-person who still respects/likes Peter... *sigh* I dislike this scene and honestly how this writer has been handling Miles in general.

Nice. From both lists I can see that we have very similar tastes. :D

Interesting. I like Kingpin a lot but not really that invested in him, I don't think I'll be picking this up but if I hear good things about it I probably will.