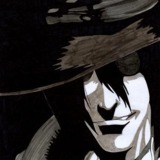 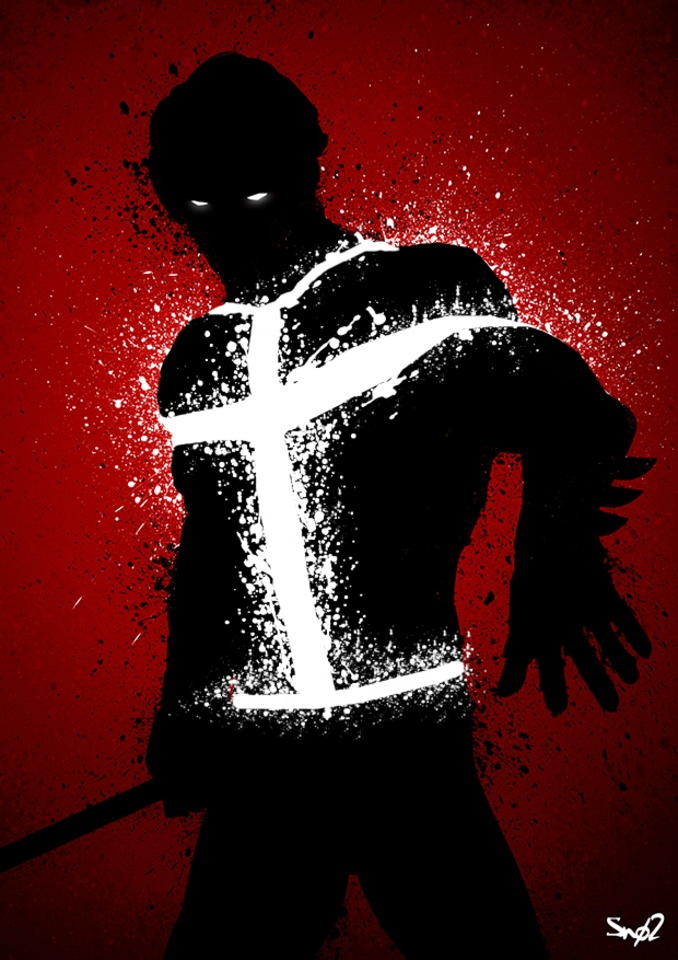 Ryan R. James was just a regular man, a writer and web designer, cocky and brash but also thoughtful with a gentle nature always feeling like he was destined to change the world, who one day after much planning and a lot of Amazon purchases took to the streets in a spandex suit with hockey pads attached carrying a spray painted pole arm and a flare gun, Ryan is mortally wounded defending the victim of a violent crime and is left lying in the dark alley to die.

In deaths clutches he ascended but not permanently, His valour, bravery, compassion and his willingness to put others lives ahead of his he was given a second chance but not as the person he once was, he was reborn.

He awoke on that same night not more that a second later even though it felt like a lifetime had passed by, He was muscular, had been trained in martial arts, acrobatics, his aim had improved and so had his focus but that was not the most amazing part.

His wooden pole arm had become the Staff of Samson Indestructible, able to be as short as a grain of sand and as tall as a tree, grass thin or log thick and can be used as a shield for almost any attack if spun quick enough and which the user has complete control over.

His flare gun had become the Gun of Gabriel, able to shoot almost any projectile from grenades to knives to rubber balls, it can be split into two guns, change fire rate and can even be used as a thruster if need be, The most devastating attack of the gun is the Blinding Light an orb of light so bright it can temporarily blind anyone the user wants it to.

His Spandex and Hockey pads are now Angel Armour near indestructible strong but light, only visible when the wearer wants it to be and giving the user the ability of Healing Light so they can Heal, Protect and Block.

But it was his scooter which had gone through the greatest transformation it was now the Heaven Hog fast but heavily armour with slots where he could attach his guns, one wheel at the back and two a the front. The Heaven Hog's greatest ability was Magic Moment the ability to slow down time but at the cost of great energy.

Dimension Jumping: Amazing Angel when needed can be teleported through different dimensions, when there is universe scale threat or just a villain with reality warping power Angel can use the this ability to fight the threat wherever it is.

Healing Light: Using his Angel armour to both heal himself and others, create powerful shields over anything or anyone he chooses and creating protective force fields. He is constantly using this abilities to stave off fatigue and keep himself protected from various attacks by creating a series of force fields and shielding.

Staff of Samson: An indestructible Staff, able to become as small and thin as a grain of sand or as long and thick as a great red oak tree, a valuable piece of Angel's arsenal, the staff also allows him to conduct his Spin Cycle manoeuvre.

Angel Armour: The Holy armour given to him after successfully completing his Angel trials, near indestructible, able to appear and disappear whenever Angel needs and provides Healing Light. Despite the armours heavy appearance and nigh indestructibility Angel describes it as feeling like he's wearing 'nothing at all'.

Gun of Gabriel: Angel's magical gun, even able to shoot anything Angel can think of whether its a shuriken, tennis ball, a box full of pins or a heat seeking missile even though whatever is shot fades after time, able to shoot Blinding Light at opponents as well one of Angel's most powerful attacks.

Heaven Hog: Angel's usually mode of transport, able to keep up with some of the fastest speedsters in the universe, A huge bike with two wheels at the front one at the back, heavily armoured containing slots for Angel's weapons, it also gives Angel the Magic Moment ability.

Magic Moment: Angel has the ability to slow down time using his Heaven Hog, this power greatly drains from Angel's energy pool but it is one of his most useful. Recently Angel has honed his skills and mastered an 'always on' state for this ability, he can now see, move and think at accelerated speeds as the world moves slowly around him.

Spin Cycle: Angel uses his Staff in tandem with Magic Moment to spin it at incredible speeds, providing a block and sometimes absorbing power to the most powerful of attacks. This attack can be used instantaneously and can also transport whatever object (or person) Angel desires.

Light Channeling: Angel has through extensive training with Da Zhanshi learned the properties of chi and uses this to channel his own pool of energy to different areas in his body, this can increase his strength, speed and fighting skill tremendously.

Blinding Light 1: Angel can use his Gun of Gabriel to shoot a ball of light, temporarily blinding anyone he wants to blind, this can work as an escape, distraction or attack. Able to blind any person or entity it can also function as an EMP for satellite's or power grids.

Blinding Light 2: A newer ability he only recently discovered, Angel can pool together his energy and release it in a massive explosion, Also known as Blinding Light, this attack can be both lethal and non lethal depending on how weak or powerful Angel chooses it to be.

Non-Corporeal Form: Angel had recently made a discovery through a couple of scrapes with fate that cut a little too close to the skin, his mistake this past year was believing he was still human when in fact he's something different, no body just a spirit. He can use this form to avoid death at almost all costs and even inhabit other entities fuelled entire by spirit such as his space station Nephilim.

The Arch Angel: Spoken in hush tones, stories told through the centuries, The chosen warriors of light wield unimaginable power, power they themselves cannot handle, so they build walls, walls to keep the power from over coming them but when one reaches the point of death the power takes over, Angel's other form calls himself the Arch Angel, indestructible, able to fire any projectile, bend time, limitless flight, incredible speed, can grow and shrink to any size but this form Angel has no control over and the physical toll it takes on him could destroy him, for good.