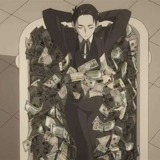 Cash rules everything around me

@zeon_liafador: you are a liafador, isn't that what you guys do, lol

(Linda is Linda in WDYCT? Or is she decibel only in canon?)

I dont know if the drones are even allowed at this moment, but yes they would be turned on and working off program

@prince_han: thank you. Its a tweaked Sebastian Shaw template

If the plane which harbored Amadeus stumbled across any turbulence on his way to North Korea, no one on the Ikaris-27 would have known. It was designed as a stealth interceptor by China. Able to cross the Pacific with enough fire power to start another World War if needed, but if such a monstrosity were needed, someone had already pushed the red button. That is why the design allowed an alloy to sustain EMP forces, much like the one emitted from a nuclear fall out.

Where the exterior screamed a warmachine, the inside looked like it belonged on the Rich and Famous. It was an upgrade that Amadeus needed, and as such was installed.

Four stealth fighter escorted the Ikaris across the South China sea, each equipped with the same EMP alloy which it guarded. Six more stealth fighters would follow the envoy later, once completion of retrofitting them for the meta-human threat which attacked the North's regime occurred.

Amadeus was not a communist. He wouldn't even consider himself an anarchist. He was a man of opportunity, and with each sip of wine which he indulged, the opportunity of zeros in his bank account was all that mattered. The attack stirred China, even though it was not on their land, and as such stirred their accounts to notify Amadeus and his specialty.

A smile stretched across Amadeus' face, as he could see the vertical descent of the Ikaris and the escort fighters upon Korean soil. Amadeus was greeted by their general, and the pleasantries ensued. Amazed at the military might before their eyes, Amadeus grinned, showing what real money could buy as the back hangar door opened revealing a surprise for the Supreme Leader of the nation. China much like every nation did not like trouble at their door, and as such money was not object. Especially when it came to defense of their sovereignty.

They would see a platoon of mechanical droids, China's answer to nuclear fallout in defense of the land. Much like the planes, they too designed to battle in a post-fallout scenario, heavy armaments such as SAMs, energy scramblers, and heavy tank busting bullets - the best China could offer. They weren't going to be free, nothing is, but the game is the game, and to win it one has to show what one has sometimes. That is what his father told him years ago.

@prince_han: since you in confessions, where you been lately, mano?