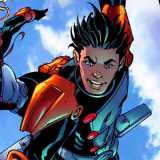 I've been planning to replace Alpha Guard for some time, and it's finally happening! I've got a new bio that I'll be using from now on. It's still Alpha Guard, just a new development in his story that includes a name change, new powers, and an updated background. Again I'll be using it instead of Alpha from now on so any feedback and suggestions would be greatly appreciated.

I'm still finishing this bio, here, but if some people wouldn't mind reading it and giving some feedback I'd appreciate it.

I was fine with the old look but this is pretty cool. I especially like the ability to go straight to one of the main forums instead of going to the main page and then going to a specific forum. The wallpaper thing for the bios is also neat. However I don't like the bugs like lack of PMs. I'm not sure if there's a lot different, but aside from the bugs I don't have any negative feelings toward the new look.

Not exactly the same, but similar.

Heroes on a team shouldn't have exactly the same uniform like the Fantastic Four, but there should be something that the members of each team have on their uniform, like the logo, that sets them apart from just a regular hero.

Did you ever notice?

OK, this is just something I find rather strange/funny. The Winter Solstice is December 21, correct? So most of December is really Fall, correct? And yet, for pretty much all of December, people have stuff like snowflakes as decorations that signifies Winter, in the Fall. Just an interesting thought.

The Watchtower, no question

OK, not much to say here. Just wanted to let people that I've updated my powers. Not greatly, and I added some weaknesses to try and balance it out. Any comments, post them here.

Writing's what keeps the story interesting, it's easier to ignore bad art then bad writing. Obviously having both is preferable, and it's hare to fully enjoy the story when it has bad art, but it would be even harder when the writing is bad.

I don't know exactly why, but these costumes just seem very cool.