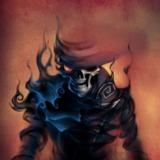 According to the Official Handbook of the Marvel Universe's profile on Mikaboshi, billions of years ago, after the Demogorge had purged the degenerated Elder Gods, the Shinto gods Izanagi (a seventh-generational deity of the ancient Amatsu-Kami pantheon) and Izanami (an aspect of the Elder Goddess of Earth, Gaea) ventured into a formless world (Earth) that was dominated by a dark, primordial void where the ancient force of nature known as Amatsu-Mikaboshi existed and reigned.

1:Outplays Nightmare in his own realm.

2:Sweeps Ares and Apollo aside like the gods were a nuisance.

3:In the mist of battle, Zeus is outright killed by Mikaboshi who rips his heart out.

4:With his slave pantheon, Mikaboshi brings about the destruction of the Shi'Ar gods.

5:Mikaboshi conquested all the underworlds of the universe, and even Dr.Strange, other gods and Death herself fear him.

7:Mikaboshi can change his size to a Planetary scale.

8:It was necessary Thor, Hercules and Hellstorm to work together to cause some damage on Amatsu.