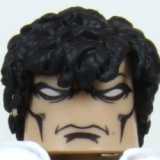 Clark got 1 picosecond and 5 nanosecond feats.

Norrin is only faster in travelling.Clark's brain is also perceive and trace lightspeed

And every version of Sentry beats Superman, stable Sentry was able to stomp Terrax who's a easily a planet buster, Sentry exchanged planet busting blows with Photon while still holding back, and stable Sentry was even able to beat Void. it's a misconception among fans to think that stable Sentry is weaker than Void. What did Superman anything close to that? Superman can't even blow up a single planet

and Flash can't even blow up a single planet.I guess it's a DC PIS

None of the scans are from the current Superman, those are all pre-52. I was talking about N52 Superman.

if it's pre-52 i guess he can matchup with Surfer in combat speed, unless Surfer uses his board, which is not allowed in this box battle.

Well, i don't remember Flash blowing a planet either, and i don't think he can, unless he uses his IMP.

Superman vs Sentry - if Sentry isn't Deathseed or Void

Superman vs Silver Surfer - Norrin stomps.Clark should be slightly faster in perceiving-reaction speed but Norrin would keep up .Clark is outmatched in every single way

And every version of Sentry beats Superman, stable Sentry was able to stomp Terrax who's a easily a planet buster, Sentry exchanged planet busting blows with Photon while still holding back, and stable Sentry was even able to beat Void. it's a misconception among fans to think that stable Sentry is weaker than Void. What did Superman anything close to that? Superman can't even blow up a single planet

this is how i see things :

dance fusion gives a power boost of at least 4 times

how? because Gotenks is able to go SSJ3, while Goten and Trunks can only go SSJ1, in other words, if they combine their power they will have 2x SSJ1 which is equal to SSJ2, but they still managed to go SSJ3, hence, the fusion dance gave them a additive boost of 4 times the initial combined power at least.

potara fusion gives a power boost of above 15 times

Superman vs Hulk (depends) (Supes has faster punches and can dodge all hulk's punches, but he can't knock down Hulk and Hulk will just keep getting stronger and stronger with time, while Supes will get tired, eventually Hulk will land some punches, and Hulk punches can destroy planets double the size of earth, while Supes never displayed such level of power. So, it depends on the rules of the match, if there is rounds and punches count, Superman wins, and if this is a fight till KO/Death then Hulk wins after a long fight)

vs Sentry(Sentry is unkillable and can regenerate instantly, Sentry wins)

vs Silver Surfer(Superman's punches can barely hurt Silver Surfer who tanks supernovas with no harm, and Surfer is way faster than Superman when it comes to rection/punch/dodge, furthermore Surfer can amp his punching power with his power cosmic, it's an obvious victory for Surfer)

vs Thanos(Thanos stomp, what Thanos did to Surfer with barely punches, will happen to superman too in a worst way)

they get speedblitzed and stomped.

IMO, high level celestials are on par with the Abstracts (Eternity/Infinity/Death/Oblivion), while even higher end celestials would be beyond them (ie Tiamut and Scathan)

Celestials of the entire multiverse couldn't do anything against Chaos Lord who's only a projection of Oblivion.

There is a clear hierarchy of power here, Celestials are below High Abstracts like Death, Eternity, Oblivion and Infinity.

spite
Thanos stomp without infinity gauntlet, Thanos will make Accelerator his b?ch with TP, or just desintegrate him. this is stupid

I would say they make it to Eternity.

I was thinking they stop at 6.

Not anymore. They clear imo

Celestials are my favorite characters. I always think of them as a hive mind and aspects of Eternity though this has never been shown. Stop at 7 I suppose.

Tiamut and Scathan would each solo the field in a horrible stomp.

they stop at 6, Death stomps.

Tiamut is not in the Celestial team, and Scathan also isn't part of the team, at least not the one that helped stop Protege, because he's not from 616 universe

Krillin is more versatile, he has destructo-disc, multi-contolled blasts, even astral projection, saitama has nothing against TP and didn't show yet planet bust level, while Krillin had power level over 10.000 in the manga in Namek saga, not enough to blow up a planet but Saitama didn't fight yet someone who can destroy the planet, just destroy the surface of the planet, which is a lot weaker than planet busting.

so going by feats, they might seem equal in power, but as i said Krillin is more versatile and faster than light, while Saitama's top speed by feats is only massively hypersonic.