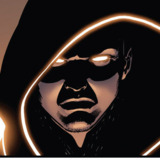 ‡ Revenge is an act of Passion;Vengeance of Justice ‡

"Samson? Sorry to disturb you." Their reluctant yet angelic voices harmonically hailed the Superman of Superheroes as he mediated.

Healing the mind was as important as healing his body. And the False Bay, despite its current state of criminal dominance, still held a spiritual connection to its afrofuturistic roots.

It had already begun to reshape and mold Samson's shallow perception of the World.

"This man really wants to speak with you." the Trifecta announced.

Slowly the Cybersin Superman rose to his feet stylishly swimming his arms, then shoulders, into an all black and purple trimmed dashiki. Covering up the recent surgical scar running down the length of his back. "Was I not clear enough when I told you no visitors?" Of course the question was rhetorical. Yet as the beautiful trio of identical sisters helped usher in a hunched over hobbled stranger, any anger Samson may have felt quickly retreated.

As a child, alongside with his brother, the executives of Project Apex had brought the Starr brothers to Africa, and to what was at the time known as, the Kwazulu Alcazar. Now more infamously known as the Rogue Nation. But back in the day the Alcazar was a fairytale told to up and coming superheroes in North America. Primarily young African-American prospects in hopes it would help to influence particular social tendencies and inspire superheroes to be more than just lawless vigilantes by showcasing a superhero who had made himself a king. Naturally, the Bashir's prided themselves as being the 'wardens' of the Bay, rather than the monarchy of the bay. But to exercise unlimited power with no oversight, well, that is about as kingly as any one person could expect.

"Tis been a long time, Stah. I see good health has blessed you, no?"

"Dont give me that bullshit you're supposed to be dead man what the actual f's is going on? Where have you been all this time?" Samson questioned with a slight look of contorted confusion masking his otherwise abnormally charming features.

"Dat tis a story for anothah day. Right now we dont have much time. I need your help. I need to retake the Bay from my son and return it to its people. Musa has destroyed everything my family stood for. Our honor will never again see dee light of day. But at least I can do something. I can do dis. If you'll help me?"

It was as about as submissive as Ali had ever been. He knew the danger, the risk. That without the Universal Patriots help, the Rogue Nation would forever remain a new age cove of modern day pirates and terrorists.

Samson grimaced as he maneuvered his shoulders causing them both to crack and pop with an unearthly deep rooted rumble. He could feel it. The pain. The fragile sensation running up and down his repaired spin.

"You know your son and his people fixed me right? Seems kinda jacked up me repaying em by helping you. Hell old man, I aint even 70% yet."

"Let me bring the squad in on this. See what they think. They'll help."

So many questions and yet, the unexpected revelations at the hands of the fairweather traitor, 'General Riberia,' had enlightened the former warden of the bay. Liafadors, Cardinals, and a plot involving the False Bay had all been revealed, had all been brought to light before the disgraced General had fled leaving behind his extravagantly tailored battle suit.

Every compulsory impulsive screamed at the fallen warden, 'home!' 'go home!' But the hero in him would not allow such an act of selfishness to govern his motivations. After all, years earlier; alongside his father, the dynamic duo had led a mass exodus out of Venezula and into the Kwazula Alcazar. Rescuing hundreds of displaced refugees. As overnight, humans were hunted down and executed to make way for the then, new mutant kingdom of Venz. It was an act of noble sacrifice that had earned him the moniker of the Prince of Orphans. And should he succeed in freeing the mentally manipulated children, caught up in the indomitable dogma of Cardinal influence, the Prince would become a King. The King of Orphans.

His feet galloped atop the auburn dirt covered road with graceful strides and gait, keeping his senses sharp, though dissociated from the chaotic conflict brewing between the more well known super-powers. Even if he had wished to test his metal against those directly responsible he somberly understood that it would accomplish nothing. A fight of that magnitude would take too long, expend too much energy, the risk vs reward wouldn't justify the forfeiture of so many resources when the true objective was the freedom of the children.

Sticking to the edges of the encampment, Ali began to slowly incapacitate the weakest and smallest of the child soldiers. A nerve strike here, a rear-naked choke there, he pressed each position with surgical stealth and a whisper's whistle. Then, he saw it, saw her, as a small armed contingent drug her towards the center of the camp. "What are you doing heah" he thought. Recognizing the archer instantly from his own sorta dealings, their past a complicated one. Seemed fate had deemed that they cross yet again.

With a deep breath his emerged from the brush and underbelly of the lockout tower. "Sir! We caught this one just outside the perimeter." Ali remained silent but kept moving forward. "Sir?" without hesitation the Vibranium Maharajah reached out and grabbed the unsuspecting solider by the barrel of his machingun. Quickly jerking him forward into a throat crushing close-line while simultaneously dropping the General's military belt and somersaulting forward. "GRENADE!" someone roared, scattering the unit in all directions and leaving Abigail unattended. The false alarm would hopefully open a window for the disoriented archer to reclaim her freedom. Everything else, would have to wait.

@clara_mass: Well to be fair, with a quick glance at the forum and the similar one shot character blogs,the numbers all suggest that your diminished glory is still above the cut lol

For a cameo he sure does keep himself in the forefront.

@arquitenens: Its funny cause almost every single post I've ever done that I myself really enjoyed, others didnt. Where as the posts I've hated have gotten high praise.

In the good ol' days his threads would cause activity....

Seriously though, this is cool. Hopefully you stick with it, cause if you do, it certainly will generate activity :)

Depends on the lock