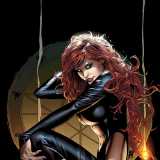 Alexandria descends from a long line of very powerful witches on both sides of her bloodline. She is the daughter of Taven Cromwell, a powerful wizard, and Illyana Rasputin, the original Magik. Being apart of the Cromwell/Rasputin line of heritage she is marked for greatness in the magical realms of the universe. She also goes to a lavish, exclusive school for witches.

She struggles with carrying the family name at times, but never regrets her heritage. She has learned to control numerous types of magic including forbidden magics, that were sealed away ages ago.

Her reputation as an air-headed, trouble maker causes mentors and teachers to shudder with fear. However once Alex puts her mind to something, she can do what others find to be the "impossible".

Alexandria is the greatest magic user in the Cromwell line, stemming from her mix of magical parentage. Her magic is the strongest in the history of witches, and she frequently studies under the greatest philosophers in history. Alexandria believes that philosophy helps unleash new lengths of magic, unheard of by even the most powerful witches. Alexandria also studies under the greatest magic users in history, including Agatha Harkness, Doctor Strange, and her mother, Magik.

She spends most of her day using her magic for her own personal gain, and to mess with those that mess with her.

Through extensive training she has learned to use charms, and enchantments to increase the strength of her powers and spells.

Alex seemed to have lost most of her magic, at the time of her mother's death do to emotional trauma. It took her time to build her magic once again, but she lived up to her name and stayed focused. Alexandria has devoted her life to finding a cure for the Legacy Virus, which took her mother away from her.

Sorcery: The ability to tap this universe's infinite store of ambient magical energy and manipulate these to a variety of effects. A skill derived from three major sources: personal powers of the mind/soul/body, powers gained by tapping the universe's ambient magical energy and employing it for specific effects and finally, powers gained through the tapping of extra-dimensional energy by invoking entities or objects of power existing in mystical dimensions tangential to her own. The latter means of power is usually gained by the recitation of incantations.

Some of these effects include forming magical energy bolts with a high degree of potency and control. Erect energy shields or screens with a high degree of imperviousness to both physical and magical damage, create illusions, teleportation across the face of the Earth or into a mystical dimension, thought-casting over short or vast distances in a manner virtually identical with telepathy, levitation and astral projection.

Alexandria has a vast knowledge of sorcerous spells and incantations invoking names and aspects of various extra-dimensional objects and beings of power. Through these incantations the magi is able to call upon these extra-dimensional power sources for very specific effects without taxing the personal abilities.

Elemental Magic: With her magic Alexandria has shown a greatest affinity to manipulate the elements.

Telepathy: Alexandria can use her magic to manipulate the minds of others. She has displayed the following abilities.

Transmutation: Alexandria has the ability to rearrange atoms and molecules in both inorganic and organic matter. She can change an object’s or creature's shape.

Alex briefly joined a tribal group that studied various ancient magics, which caused Alexandria to grow even more powerful than before. Joining this tribe gave Alex a new set of powers and instincts. During her time with the tribe she learned a specific type of magic, that she treasures greatly. This magic, let's her turn people into animals and much like the sorceress Circe, she enjoys turning men into animals.

The tribe used specific weapons that only witches of great power could use.

The Protected are a group of people who are protected by the god, Tricerberus from the time of their birth. When someone goes to Tricerberus for a favor or wish they make a pact with the evil god. The pact states that when they have their first child, they will give it up to him. Those babies are then put under a spell, that protects them from magic of all kinds, even some of the strongest magic. The children under the spell, are to serve Tricerberus to the time of his death. If the spell is taken off of one of the protected by someone other than Tricerberus, that person immediately dies.

Strike the Supernatural: The Soulsword has been shown to only harm magical creatures or objects -- it rarely injures non-magical beings or items.

Maim the Ethereal: Intangible and ethereal beings can also be struck.

Counter/Break Spell: When Alexandria uses the Soulsword to strike a person who is possessed, ensorcelled, or otherwise magically controlled or transformed the sword will be able to counter or break the spell.

Stepping Disc Control: The Soulsword can be used to control Limbo's 'stepping discs.'

Sword Summoning: Alex can store her Soulsword in nothingness and summon it whenever she desires.

Summon Armor: It can also be used to summon promethium battle armor around the wearer.

Augment Magic: Any magic user who holds the Soulsword instantly has their mystic abilities augmented.

Alex learned to focus her magic into mystic energy, which allows her to transform into a demon, beast-like form. In this form Alex has super strength, super speed, accelerated healing, and photographic reflexes.

In her demon form Alex may lose herself, and her sanity, and may also turn against her loved ones, and teammates, and for this reason she prefers to stay away from this form.

In her demon form, Alex is nearly invincible. In this form, her witchcraft doesn't work.