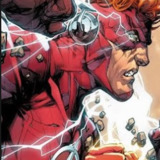 My name is Alex West, and Once again, I am the Fastest Man Alive

"Live life at your own speed. Take pride when you cross the finish line."

It was cold, and dark, a maelstrom of thoughts none good, and all of them harsh in origin, their tone accusing, their words brutal and unrelenting never giving a moment's rest or reprieve. The Crisis was over and the heroes had won, but to Alex, it wasn't a victory and all he could think about was the lives lost. He sank into a depression deeper than any mood he had ever been in before.

There was no way to make it stop.

Then the knocking came and Alex while laying on his bed staring at his ceiling stood up, his bare feet landing silently on the wooden flooring of his room. Walking to his door he would pull it open to see his friend Lilly standing outside his doorway draped in white with a smile as if unaware of how late it was, her smile quickly dropped once she got a clear look at the speedster's face.

"My God, what is wrong with you? You look like your cat just died." A subtle silence accompanied the two before Alex swiftly shut the door in her face and walked back inside, this time to the kitchen. He grabbed a gallon of milk from his refrigerator and sat down pouring himself a cup as the sound of a door opening was heard outside the entrance to his house. Glancing from his glass his eyes settled on Lilly as she took the seat across from him and bore deep into his emerald gaze. He looks at her but the fire he once held had been dowsed with ice water, making the green in his iris paler. Lilly had never seen him like this, never. She was not used to it and it unnerved her deeply. "Alex." She commanded. He moves his eyes slowly, like they're heavy, an effort to move. Lilly wanted to crack a joke to lighten the tension but she knew he wouldn't laugh. "What's wrong?" The words were simple, but saying them were not. She was scared, he was scaring her.

"Nothing." He said. I want to die. He thought. He had held the lives of so many people on his shoulders and so many of them he had let down, the world was saved sure, and for that Alex was grateful beyond belief. But what about his soul? The memories of the sins his fragmented selves had done, the guilt...it was so much. He possessed adult memories in his child's brain. This was the breaking point, and the dam had split open. How many people had he hurt from simply existing? How many lives had he taken in and out of his uniform? The thought made him want to throw up, he stared around as if he was in a pit. His surroundings were exactly the same, but they gave him no emotion. How could that be? He needed emotion to feel alive, to feel love.

But he didn't feel it anymore.

Missed calls from Linda he hadn't answered dating back from the Crisis itself, Linda. The woman he loved above all others and he had hurt her too, the one he vowed to keep safe. "I feel horrible." He said aloud. Lilly's eyes narrowing in concern.

"Why?..." She said slowly, her body rose out of her chair as she began to look around Alex's kitchen and dining room "Are you on some new meds or something Alex? You're acting really strange and I don't like it." These feelings were new to Alex, yet a lot of feelings were new to him, over the past year he had to figure out that the entire life that he had known was a lie and that he was a temporal replacement of a version of himself so far gone existence couldn't even allow him to remain any longer. He had learned to put those memories behind him because they weren't particularly his, he hadn't committed those atrocities, no one had died under his watch because he was too good to fail. Until he wasn't...and people died because of it. Then there was no difference in those memories, no median to divide them in his thoughts, they were just there. And now rests a silence to his soul; He is the fall leaves under frost. He shivers at the chill in his own blood, coldness bringing the synapses of his brain to a standstill as if they were shot from a cold gun. At first, part of it was a pain, yet one he could endure, one he could sleep through night after night in hopes that he could do better the next day. But Key City was in ruins, most of it his fault, he had to carry dead bodies and clear them out of the streets he was supposed to have evacuated.

"Hello?" Lilly said, trying to grab Alex's attention and his head turned to her once again a small smile appearing on his face. "I'm fine Lilly, I just have something I've got to do. You can stay if you want, I won't be gone long."

With that, he would turn and walk into his room proceeding to put on his shoes and jacket before appearing next to his front door. "I'll be back soon." The lie was vague and thinly concealed as Alex was a terrible liar, but Lilly didn't think anything of it just happy that he wasn't acting all depressed anymore.

"Well alright then, you should invite Linda over and we can all watch a movie or something."

He'd nod as he twisted the knob and opened the door, "I think she'd like that. I'll go ask her." The click of the door closing emphasized his departure and to Lilly's surprise, he was gone and out of her view by the time she looked out of the window.

Outside of Lindas' house

The Speedster skid to a halt outside his girlfriend's house and he simply stood on her doorstep as he tried to come up with some reason to knock, some explanation for what he was going to do next, he had decided and he was going to execute. He had caused to much pain -to her especially- her life forever changed because of his actions, her mother suffering from his lack of action and his changes to time. His hand kept raising to knock but everytime fell to his side unable to follow through.

Linda I'm sorry, My time with you has been the best and there's no one I could ever see myself with. How I feel about you transcends time, space and even the Speed Force itself.

His hand raised once more, his speech planned out but he once again halted.

Then he was gone.

There was no explanation good enough to explain what he was going to do, better to just not say goodbye.

Velocity ran as fast as he could, the Speed Force bending to his will as he siphoned as much as he could to get to his destination, the white electricity the world had learned to define as hope streamed behind the Fastest Man Alive as he pushed forward as hard as he could, each push of his legs brought him closer to lightspeed, closer to the Speed Force. He ran like lightning through the sky as his surroundings began to shift and his body began to heat up telling him to keep going. He had messed with time before but the Time Stream approved of this destination, this change for the better.

A chance to put things the way they were supposed to be.

He ran not through the past, but to the future. His own origin story.

Sliding to a stop behind a tree Alex took a moment to gather his bearings, the powerful memories of this place clashing in his mind as he thought back. The sky was black and stormy and the pulsing electricity of Alex's father lit the vast area around them his house standing dauntingly behind them, he saw the fight in a way he never had before. Flash Lightning vs the Time Master; the two had clashed blows with the ferocity of balistic shells faster then most eyes could see. His emerald eyes shifting directions he latched onto three child forms recognizing all of them instantly.

It's almost time, he thought. This was where it all started, where his life fell apart and began to crumble. The Temporal energy circling them was almost tasteable and for a moment Alex felt a sense of unease, a tinge of hesitation.

Alex's younger self leaped to the defense of his father who was now at the mercy of one of his greatest foes and his ultimate downfall; but before he could get too far a strong hand gripped the childs shoulder and steadied him halting his movement. Velocity stood next to him protectivly his cowl pulled up and his face blurred as Alex vibrated his body to obscure his identity from himself.

"Go back to your brother and sister Alex."