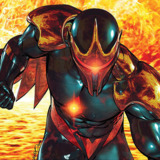 "Don't be afraid. My name is Aleron, you can trust me." 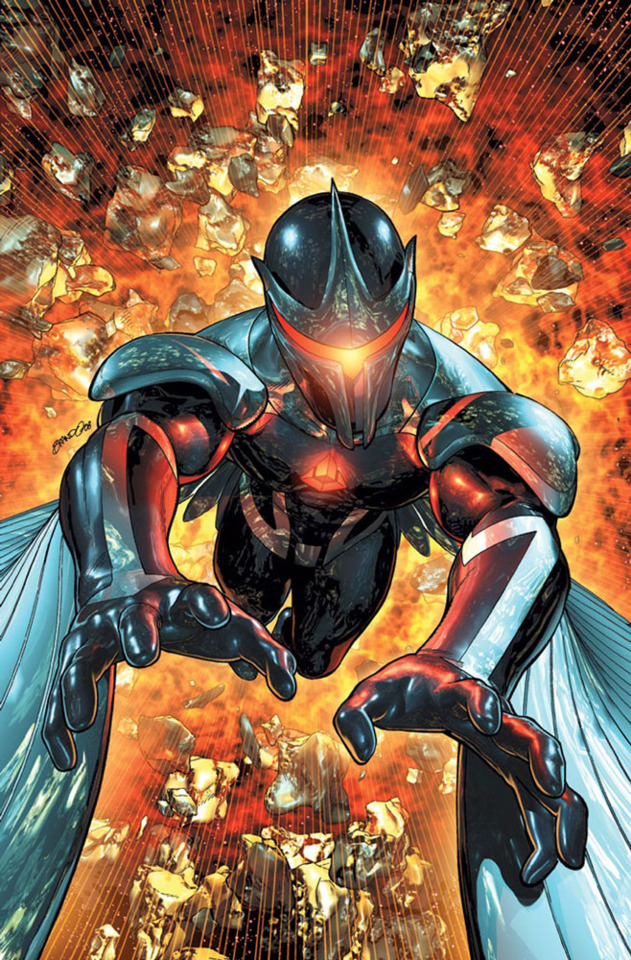 While his true identity was revealed by Blackcat's Sub Directer Octavian Winters, Kar still semi uses his Aleron persona to seem more friendly to people. In truth he can take on pretty much any form he chooses and adapt, evolve, or shapeshift, as he pleases. This also grants him the ability to shift out diseases with ease unlike some who have super regeneration who can be subject to things such as cancer.

Slight scars on his cheeks from an orc who shot an anti healing arrow through them.

Age: Appears 30-40. (Has made all records concerning his age disappear).In truth His real age is would be difficult to determine as he's been alive for possibly several millenia, but refuses to comment on it. This was only known by Blackcat

Erin has the capability to form wings and armor of a special material he calls bio-steel. A self healing non metal material that is as hard as diamonds, the flexibility of graphene, the shock absorbency of vibranium, and the strength of 150 tons. He protects Earth using his persona named Aleron.

However, his true identity, Kar, is a full on primordial shapeshifter. Capable of manipulating his own physical structure and even invisible one at will. In truth his limits are unkown, as he keeps them hidden. But he'd been shown able to shift through dimensions, mimic opponents and anything he's seen, as well as using simpler shapeshifting abilities such as invisibility/intangibility, animal forms, superhuman physiology, matter mimicry, etc. He can effectively become an ethereal being or complete energy life form. He is also capable of turning into a live adamantium giant or an atomic sized creature. He has no trouble shifting to percieve and react at faster than light speed and having various element related senses, some of which have no word in earthen tongue. He can also obtain properties of things like Nth metal to cancel out magic. Again thanks to his shifting abilities he can become extremely intelligent allowing for perfect memory, telepethy disruption, high speed thinking and numerous thought streams.

Bio-steel formation: The ability to form an armor with wings made from a material he calls bio-steel. This is as hard as a diamond, more flexible than graphene, the shock absorbency of vibranium, and the strength of 150 tons. This bio-steel is purely organic. It is not easily burnt being able to survive tempuratures from 2.8 kelvin to heat of 10,000 degrees farenheit. Has been different colors, typically in a specific pattern.

Visor: A protective visor to protect his face from things such as space or atmospheric conditions. This often moves from behind his head to the front so is not in use at all times. It is just as powerful as the biosteel and is perfectly see through for Aleron but works much like a one way mirror.

High pressure lungs: He can compress his lungs enough to fill an average blimp. He often uses this for swimming purposes.

UV absorption: He can absorb UV radiation and turn it into energy for himself as well as force himself to vibrate extremely fast in order to cut things and protection. Fortunately this ability to use energy also grants him potential immunity to energy based attacks. He will however, for higher level attacks, have to channel the energy somewhere or only hold it temporarily before using it. When given a surplus of energy he can turn it into energy beams. Although he doesn't tend to do this.

Energy redirection: After a fight with Luna Hawk, Aleron realized that energy based attacks (particularly electricity) would become a problem. Because of this he practiced and practiced until he could redirect extremely powerful attacks (such as lightning). This full limits are unkown but energy based attacks have become nigh useless, including radiation.

Razor wings: His rings can be razor sharp. Enough to cut through steel like a hot knife through soft butter. He can do this with any bio-steel formation that has an edge.

Razor blades: Mainly on his knees, elbows, fingers, fist, and feet. This allows for enhanced climbing and fighting with vibrating spikes.

Claws: He can change his feet into bio-steel bird claws

Unarmed combatant: Even when he doesn't use his wings he has surprising skill in combat and especially stealth. He often uses variations of military training techniques to accomplish a win. These are normally simple but can become extremely complicated.

Speed: Has shown he can perceive speedsters and not only catch but return every bullet fired from a mini gun. However unless he, or someone, is in extreme danger he often has to build up speed. His top speed is clocked at mach 20 flying. When normally fighting his speed is only enhanced human. Below sonic but fast enough to possibly dodge a bullet, which always seem to activate faster speeds so something moving at that spees such as a fist. However he is fully capable of speedster level actions and can "shift" through dimensions or teleport by using his powerful shapeshifting

Durability: In human form it is simply enhanced healing. He is protected in an unkown way against telepaths and empaths in any form. Direct contact with someone allows a connection to be made for the stronger ones, mainly empaths. However as Aleron it is as bio-steel. His face is more vulnerable however. Can adapt or improve hos own physical matter to fit situation.

Hawk vision: His eyes can adapt to the situation to see what they need to. This even allows him to see and compute a person brainwaves, nerves, and chemical changes in order to determine their thoughts, actions, or biology. This also allows him to see things like time travellers, magic, space/time/reality warping and mutations. However sometimes this can become a problem.

Experience: Aleron is very experienced as a hero and as helping STRIKE. His experience has made him more conscious of what he does and what others do often remembering things that would be important in the future. His experience also made him somewhat of an introvert. He'll "hang out" but he's not the most willing to share. Because of STRIKE he learned both how to disappear and how to investigate. His experience has made him much smarter and wiser making him much more of a threat than he once was. It has also boosted his confidence in his own abilities and naturally trained him in predicting many actions of certain people.

However, his experience with Blackcat has made him capable of high level spying and acting, extreme stealth with or without powers, and even practically vanishing without warning. He is also incredibly knowledgable about almost everything and can pinpoint a persons weakness with ease. His experience even before Blackcat, having been older than this dimension, has allowed himto learn almost every language (including dead and undocumented ones) practically every fighting style and has had just about every degrees worth of knowledge and experience.

Moral rules: He is willing to lie if the circumstances are right and his focus is keeping the populations safe. He's also become more willing to kill over the years.