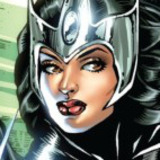 Occupation: She is Akira Hoshi's Tech Guru, Secretary and part of the Heroes for Hire.

Base Of Operations: Mobile

Relatives: None known at the moment.

Physical Form: Athletic with slightly toned muscles and beautiful. However, Felicity is paralyzed from the waist down so her legs are heavily atrophied. Because of this, she usually wears a blanket over her legs.

Felicity does not have any Powers or Abilities. She is a completely normal human being.

Paraplegic: Felicity is paralyzed from the waist down and is confined to a wheelchair. Despite her genius, Felicity has not found a way for her to regain the use of her legs and walk again.

Computer Specialist/Master Computer Hacker: Computer Science and Cyber Security are the areas of study that Felicity had learned from her time at M.I.T. before graduating from the prestigious learning institution. Because of this, she specializes not only in computers of all kinds but also is a skilled hacker.

Eidetic Memory: Felicity has a near perfect memory can recall almost anything she comes in contact with after only few brief seconds of seeing it. Sometimes she can get lost in her own memories, especially traumatizing ones.

Genius Inventor, Engineer & Gadgetry: Felicity is a genius and is able to invent computer-like technology and most kinds of electronic devices. This helps the Heroes for Hire a great deal in their crime fighting adventures. She also happens to be a pretty good mechanic.

Medical knowledge: Felicity has taken first aid and can stitch up someone else's injuries if she needs to. Anything beyond that is beyond her skill set.

Wheelchair: Felicity may be confined to a wheelchair, but she has created a wheelchair that is the most advanced on the planet. With her wheelchair, she can move herself with her hands, use a joystick to direct her movements as well as move around. But that is not all. Felicity has also built in hover technology, enable her to fly 100 feet off the ground at 10 mph. With a touch of a button, Felicity's wheelchair can erect a powerful force field that is capable of withstanding 1,000 pounds of TNT and at least 10 tons of kinetic force. The Wheelchair also has hidden weapons compartments so that Felicity can go on the offensive if she needs to.

After graduating from M.I.T., Felicity suffered a terrible accident that paralyzed her from the waist down. She surprised everyone, especially her doctor, by surviving the accident as it should have killed her. Ever since then, she worked as a hacker and computer analyst until one day she was approached by Akira Hoshi. The offer to help with the Heroes for Hire was a dream come true and Felicity has proven her worth time and again.