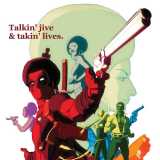 @xwraith: WHAT?! Well then I guess I'm hipster with you; I've always liked his stuff

When was it NOT cool though?

Oh awesome, just finished the game the other day, and was really sad that it had to end soo soon. Really hope they make a season 2. But this is good news, I fell in love with Bigby and all the characters. Was such a good game, way better than I was expecting.

Also praying for a season 2, but not sure how likely that will be considering that the comics pretty much wrap up next year. We can still hope though

@gizmorino: aw thanks and entirely reciprocated. We could have a cafe session about obscure mythology

Conclusion : Squirrel Girl should have her own animated series where we can see Squirrel Girl steal Thanos-copter from Thanos, Death reject Thanos and marry Deadpool. The End :)

I like how you think *nods slowly in agreement*

@gizmorino: hahaha! I'm laughing so hard right now. Did you think I was kidding when I said I grew up in Nigeria?

@blacklegraph: haha, because we wanted to show ComicVine that West Africa's got some curb stompers too. @gizmorino: What do you mean? I understood him perfectly. I sabi pidgin, you no know? @diegotobaski: It's okay. Just letting you know there are more Nigerians on this site :)

I love that we're switching between pidgin and proper English without anyone getting lost.

@diegotobaski: Now hold up. Bruv. I dey from Naija too

@gizmorino: In some iterations, his name is also Aramfe (as described by an actual Ifa priest, I believe, circa 1900) and he is a primordial being, existing before the creation of the earth in a void that he transformed into the heavens, much the same as the Judeo-Christian version. He somehow created lesser gods - Obatala, Olokun, Olossa, etc. and is indirectly responsible for the creation of the earth thanks to his gift of sand in a shell and a five clawed bird - usually a cock... as in rooster.... I think, then he retreated for some reason and passed on ruling the Cosmos to his oldest, Obatala, along with the power to control the colour white; cowries, bones, brains and therefore, souls. The cowries bit implies some power over the economy since they were ancient currency and the Yoruba belief that the soul is in the head means he also has ownership of that and can pretty much control it. Despite being described with the male pronoun in English, he could very easily be genderfluid and/or intersex considering he had to create his children somehow and Yoruba deities were quite fond of changing their sex and appearance when it suited them. Also, there is some debate as to whether his titles are gender neutral or even sometimes, feminine. Then again, the translation I read was done by an English anthropologist around the 1900s, so he quite possibly may not have been open to the idea himself.

But yes, he is given a disproportionate amount of power and responsibility. He is a sky god, creator, original Lord of the White Cloth, father and king of the pantheon. The source article's author (again, old white guy at the turn of the century) thought that this was odd because most non- European peoples crowned a celestial body such as the sun or moon, head of the local pantheon instead of the actual firmament itself. In Europe, only the Greek did that. He thought it important enough to note, I don't know why. Comparative mythology and all that. Idk, man, I guess it's not a great way to study religious beliefs. Which is why the intent of this thread should be questioned if it's not to learn about different belief systems without pitting them against each other.... -__-

I'm not really sure what else you want me to add, you've said most of it already.

@ms-lola: I was sitting here, freaking out over an essay and then I saw this and now I'm shaking and my friend is wondering what's wrong because I'm trying not to howl... Thank you for this.