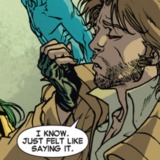 Somebody That I Used to Know

So as many of you know, I'm moving to Columbus, Ohio this weekend, where I'll begin studies which will hopefully culminate in a doctorate in Communication and a focus in video games (which have always been my big thing, in case you're among those who got confused and thought maybe I was kidding about really knowing nothing at all about comics). This move entails packing up everything I've ever owned and moving 600 miles with most of it -- so naturally I've procrastinated as much as possible, and that means I've popped in on CV more in the last couple days than I told myself I would.

I've also been listening to random music, and a song that struck me was the ridiculously popular "Somebody That I Used to Know." In particular, I couldn't quite get past the lines, "so when we found that we could not make sense / well you said that we would still be friends... / but you didn't have to cut me off, make out like it never happened and that we were nothing."

I thought about my break with CV, with my comic blog, and with many folks on Tumblr with whom I was one day talking frequently and the next had unfollowed and/or completely stopped interacting with. Some of them didn't even realize I'd cut them off. The ones who did, or will, may get upset. In fact I imagine they would relate quite a bit to the lyrics of that song; a vitriolic "well screw you, man. Not cool." And I'd have earned it, I think. Because none of this has been "nothing" for me, but the seeming ease with which I walked away and went dark communication-wise might alienate people in a way which would suggest otherwise.

And that's why I'm writing this. It's not a recant, per se. It's just me making sure folks know that I still really like a lot of you and that I hope I can get to a point (or that mainstream comics can get to a point) where I can freely follow comic news and talk shop with people without worrying about having an earthshattering message or scan pass in front of me that shows a character I deeply care about dismembered. It may well be that it's just Avengers Arena -- that when that book ends, or when the threat of death has passed from it, I'll feel comfortable "coming back." The industry has done a lot to put me off, but I'm not sure if anything affects me the way that series does, so maybe without that to worry about I can get over the rest, because I do miss the chatting. I joined CV because I wanted to feel connected to others. That's still an existing desire -- just one I've cautiously decided to forego for the most part.

Money of course was the catalyst and it remains a major point of contention. I'll be exploring part-time job opportunities in Columbus supposing I can balance work with my research and classes, and if I can pull that off I fully intend to buy comics even if I continue to abstain from regular participation in the community. I find that I thrive off individual conversations anyway, and in the interim since I posted s.u.s.p.e.n.s.i.o.n. I have talked about some comics that I actually AM reading with some people, and will keep doing so. I am willing to talk with more people in PM, if that's something that you'd like to do.

So as a heads up, I am still reading Morning Glories and Fatale. If I can afford to I plan to stick with X-Men, UXM, and ANXM. Mara's ending but The Wake is just getting started, and each issue of Astro City I've read has made me smile. For money purposes (and as a digital reader), if I read anything from DC in the foreseeable future it will be a month later when prices drop, so if you were hoping to talk that (for example, Trinity War, which I *was* trying to keep up with) just know I won't be current.

There are a lot of awesome things in the comic industry which I just can't afford to be a part of and the more connected I am, the more likely those things will be spoiled for me before I do have the money and time to engage them (for example, I couldn't very well hope to read Trinity War a month behind if I were regularly reading CV, could I?).

I guess the point is that since I made my decision, I have felt less stressed. I have felt genuinely happy and am looking forward to reading the few comics I *do* get not because I feel obligated to hurry up and read them so I can discuss them or review them or not have them spoiled, but because they are a luxury and I have (for now) the chance to indulge therein. Folks told me all along that comics reading should be fun, and I was missing out on that because of such a sense of urgency. I'm happier with comics on my own schedule, no doubt. I just wish it didn't seem at odds with my desire to also keep in touch with the people I've gotten to know over the past half a year.

So this is me saying hey to anyone who felt like my departure was cold and sudden: I'd like to keep being Adam, and not just "somebody that you used to know." We had something here that I valued, that I still value, and that I hope one day to be able to bring back as strong as it used to be, but without the baggage that has made me abandon it as of late. I'll let you know when I think that's doable; meanwhile, the offer to engage in private discussion is there.

Just, you know...don't say anything to me about Avengers Arena ^_^