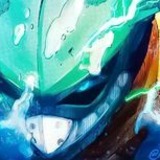 Aiden is a very timid, and quiet boy, usually reserved and preferring to keep to himself. He is often insecure, scared easily, and at times incredibly non-expressive. Though in battle he becomes a confident and courageous being who fights to prove his worth as a hero. Occasionally when using his powers he forgets about control often going all out and damaging himself and harming others, he has since gotten better at controlling this. Aiden possesses a keen intellect, able to spot out small and sometimes seemingly non-important details, he's able to also measure and keep track of his power usage so he doesn't overexert and harm himself. When in combat Aiden tends to become brash and somewhat abrasive, always leaning towards victory no matter the consequences, often at the expense of himself and his health, he tends to fight this side of himself and keep it in check.

His stored and natural energy affords the boy enhanced reflexes and an insanely fast healing factor coupled with a slowed perception of time - making him even more of a dangerous hand-to-hand combatant. Aiden can quickly react to the actions of others as well as assess his environment much quicker than regular humans. This isn't to say that Aiden necessarily slows time or perceives normal time differently than humans by default but, at the very least, he is capable of heightened in-the-moment focus, allowing him to rapidly process and react to external stimuli. Aiden when powered up at 20% he is able to move at Transonic speeds, but at full speed he is able to move much faster though at risk of causing damage to himself. Possessing incredible stamina allows Aiden to fight for days on end without rest, take brutal punishment and continue moving even through severe sleep deprevation and physical exhaustion.

Aiden's abilities don't consist of just stored energy that he releases, Aiden stores and stockpiles his own energy, allowing him to gain and gain more power increasing his physical stats to incredible standards. Activating his abilities heightens his strength, speed, agility and durability greatly. Aiden is also able to contain his power in a single body part or canvas it across himself evenly, though storing and focusing it in one area causes greater strain on that body part. The more that Aiden trains and uses his powers the stronger they become and can even blossom into new abilities.

Kinetic Energy Absorbtion: The mitochondria in Aidens body are able to absorb and convert kinetic energy into power for Aidens body as he moves allowing him to build up and release kinetic power in incredible bursts of speed and power. He can release all of the stored energy in a powerful omnidirectional blast.

Omigios Whips: Thought activated tendrils of energy that Aiden can create that can bind and trap enemies while also being able to restrict movement and increase Aidens own mobility greatly.

Smokescreen: Once activated smokescreen creates large streams of green smoke that can obstruct an opponents view for up to 100 feet

Danger Sense: This power affords its user the ability to sense and detect immediate danger and ill intentions to his person from any direction. This is signaled by a tingle in his head in the direction of the danger. This coupled with his speed and reflexes makes Aiden a difficult target to tag.

Floatation: This allows Aiden to float in midair, by manipulating air pressure in certain directions he is able to mimic flight to a certain degree.

5%: Using five percent of the energy stockpiled in his system and spreading it evenly throughout his body Aiden is able to slightly increase his strength and striking power while greatly increasing his mobility and agility. He's able to bound buildings and leap across large gaps with no difficulty.

8%: Utilizing eight percent buffs Aiden's physical stats once again giving more power to his strikes, while using this amount of his power he usually fights using his legs in replacement of his arms preferring to save them in case he needs to power up further. While in this state his punches and kicks are powerful enough to blow apart concrete quite easily.

15%: Activating this much of his reserved energy allows Aiden to utilize long range attacks by manipulating air pressure and weaponizing it as a airborn projectile. His physical stats and speed are buffed by 7 percent.

45% A large increase in power, his speed is increased massively allowing him to break the sound barrier with little difficulty. The strain it causes on Aidens body forces him to use it sparingly or only in short bursts.

100%: By releasing all of the energy he possesses in his body and forcing his healing factor to the limit Aiden's power skyrockets. No longer limited Aiden becomes a physical powerhouse capable of moving at near light speeds and striking with enough power to cave apart mountains and destroy cities. While in this form Aiden is able to utilize long range attacks by punching the air so quickly that his enemies can get struck from a hundred feet in the air and still feel the full force of the attack. While in the air he is able to move without hindrance by kicking in the directing he wishes to move and allowing the air pressure to propel him quickly