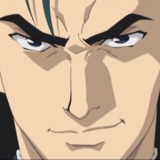 Agito Makishima(巻島 顎人 Makishima Agito) is of medium build and muscular; he is a third-year student at the same high school the others attend, but looks older. Portrayed as an anti-hero, he almost never allows sentiment to stand in his way.

He is shrewd and calculating. He was once a candidate-member of the Kronos Elite, but he is now viewed by them as a traitor. Even though he activated his Unit before Oswald A. Lisker, the second Guyver did, he did not openly appear in his Guyver armor until after Lisker was eliminated and thus he was dubbed "Guyver III". Agito shows a frightening knowledge of what the Guyver can do throughout the series.

After the Kronos conquest, Agito leads a resistance organization known as "Zeus No Ikazuchi" or "Zeus' Thunderbolts", as he plans to overthrow Kronos and steal their power (as the god Zeus did to his father, Kronos). Agito is first seen in the OVA talking to a Test Type Zoanoid who steals the Guyver Units for him after Agito promises to help him become human again...but secretly uses him to get the Guyver units and lies to him to get them.

The next we see of Agito, he is observing the results of a battle between Guyver I and a small squad of Zoanoids.

Another day presumably passes after that, because the next we see of him is at the end of school. He passes Mizuki Segawa and another, unnamed, girl in the halls, leading to the discovery that he is rather well-liked among the female population of that school. Stopping on his way out, he gave Mizuki a gentle reminder not to be late for the next meeting of the student council.

However, he was only interested in Mizuki insofar as he could use her to gain the cooperation of Sho, and thus to gain the use of his abilities by proxy. Agito has no real concern for her as a person, though he does put on a rather convincing act. He was once friends with her brother, though most likely just friends of conviniance considering his personality, and he later inquires as to the other boy's health when he and Mizuki are leaving school together.

When he learns that Mizuki has been taken hostage by the Hyper-Zoanoid Zerbebuth, through unknown means but it is likely he was informed by one of his unknowing dupes within Chronos itself, he took action to protect her. Killing the Hyper Zoanoid, he left after exchanging a few cryptic asides with Sho. Given his nature, it is likely that these remarks were calculated to make the younger Guyver more willing to see him as an ally.