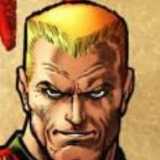 Personality: Could be described as very old fashioned, good sense of humor

- Katana on his back (Sometimes carries a Scottish Claymore and Shield)

- Various Throwing Knives in sheaths across his body made of Adamantium

(Note: Has access to a large number of other weapons, the above is his standard gear)

- Taurus .501 Revolver - fires Tracer Rounds, Blood Splatter Rounds (Gives the illusion of Death for up to 24 hours) as well as regular .501 bullets

Bio: (This character is not a Nazi, just to clarify)