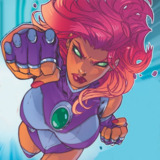 Following her return from Earth, the Ninjan Queen immediately retreat to her vacation spot on the Ninjan Planet Xiox to escape the controversy mounting on the Magnum Opus Space Station.

The Talmut Empire, lead by the Ninjan Blood Queen Madison Maynard, attacked both the Ninjan Empire and the Planet Earth to spread the "Yellow Impurity" across the multiverse.

To make matters worse, the Imperium and the Calamity Queen both assisted in the conflict, but somehow Earth won. The aforementioned controversy came from the Omega Races that criticized Addison for allowing an Earthling to murder the Renegade Queen.

In some ways, she felt they were right, but when it boiled down to it. The Ninjans dropped the ball on containing Madison when she first went rogue; her team argued that since the battle happened on Earth, the Earthlings were well within their right to execute the former Ninjan Queen.

It was a sentiment not shared amongst many of the Ninjans throughout the Empire, even though these were the same people that tried and charged Madison with "Conspiring with Foreigners" during the 1st Ninjan-Talmut War. They were mad to be mad.

Soon it'd all be over for her anyways. Madison Maynard was born to ascend the throne of Ninjeta, but after she was disposed of, Addison was implemented as the "Interim" Queen to stabilize the Ninjan Empire. It was a move loaded with controversy considering the Ninjans didn't see her as one of them. (They are Green, she's Orange). Addison's time as Interim Queen provided the Ninjans with an opportunity to reform the government; instead of doing away with the Absolute Monarchy, they reformed to a Constitutional Monarchy with the law being the Monarchy was to be elected--With that, they chose Addison as the first elected Queen.

Many of them nicknamed her the "Liberal Queen" to mock her views and ideologies. They felt she took away their traditions and customs. Many of which were founded on genocide and xenophobia. The election season was upon them all, and while she could run again, she no longer wanted to. So as the campaigning continued for whoever was to take her place, she saw fit to stay out of the public eye with her focus on the final gift to her dismissive sisters. The Ninjan Origin World--Ninjeta. (See the "Great Eruption)

The Ninjans weren't the only race experiencing a transfer of power; on the other side of the galaxy, the Talmut Empire was on the verge of collapse. King Talmut I was used as a tool by the High Queen and presumably disposed of on Earth; Madison was placed in charge and killed on Earth. The vacuum in the Talmut Empire opened the door for every enemy (Ninjans included) to pick them off. Still, as long as she was Queen, she wouldn't interfere in the affairs of the Talmuts unless it affected the Ninjan systems that bordered their empire.

Breaching from the crystal waters, the Ninjan Queen moved into the shallow waters following an Emerald light that'd descended from the skies.

She immediately recognized the man as a Paladin Knight, a member of the Paladin Order; there was an unusually high amount of them flowing into Ninjan Space Presumably to deal with the Talmut situation.

"Majesty," The Knight called out, bowing out of respect. As the Tangerine Queen leaped from the water, her auburn locks immediately ignite to dry her drizzled tassels.

"The Paladin Order. Are we in trouble?" She jests with a bit of sincerity.

"No, your highness. He replied, turning his eyes away. Addison wrapped herself in a towel; she wasn't sure if he was trying to be respectful or was uncomfortable. But the moment she did, her eye perked up as to how a man managed to convince the Sigma Sentinels for an audience.

"I believe we answered all your questions regarding the Terran-Talmut War; my people only assisted. You will have to take your concerns with the Earthling who killed Blood Queen Maynard."

The Knight threw his hands up in protest, which then prompt a curious brow from Addy. If he wasn't here about the War, then what did he want?

"I've come to try and talk you into running for Queen again. You are the best chance we have for keeping peace within the nebula" His request caused her to scoff. She loved "her people," but years of studies revealed they weren't her people at all. She was something entirely different.

"While I'm indeed flattered at the positive approval rating. I have no interest in returning as the Queen of the Ninjans". In her eyes, he could see she was serious and perhaps relieved that the burden of keeping peace in the empire would no longer be hers.

"Majesty. We know you intend to return to Ninjeta. As good as that will be for the Ninjans, how do you think the Aquarians will feel when the Ninjans return?"

It almost sounded as if he was concerned about the move.

"According to the OSA Treaty, Ninjeta still belongs to the Ninjans. Regardless of what they call themselves, the "Aquarians" are Ninjans. They have no intergalactic identity other than such. Should they decide to be a problem, they will be dealt with AS A REBELLION."

He sighed; politics wasn't his strong point. Rubbing the back of his head, he pushed his ring forward and let it do the talking.

It was as if a lightbulb went off in her head. "I see, you don't care about the Ninjans and the Aquarians. You're here because you think the next administration will involve themselves in the Talmut Civil War." She said, finally deciding to put some clothes on. His body stiffed up as if he'd been caught doing something wrong, but finally, he conceded.

"To be honest, we're not exactly happy that you're leaving. Since you've been Queen. The Kandrosi have reestablished themselves as a people. The Crattians are on the verge of developing space flight capabilities, and Ninjan restriction acts have been repealed across the galaxy. You're doing good work."

For a moment, to hear someone finally say it, she cherished the thought that the work she'd done made a difference. People could see the difference between the Ninjans under Madison's rule compared to now.

To be an outcast among your own people was one thing, but to then assume Queen's title was an amazing achievement. One, she was only now realizing. He had her, but then he lost her.

"Do you know what makes me different from them? Other than my skin, and the fact that my powers aren't hindered by water?'

He shook his head no. "I do not reproduce asexually like the women here. To produce a pure-blood Ninjan, I need a Kandrosi, but to have a child period. I need to try physically. That's what makes us different. My sisters have children and then raise those children. I want a family. That is the difference. My sisters don't, actually can't yearn for what I yearn for because we are not the same. I am done living my life in service to others. In a couple of months dear Knight. There will be a new Ninjan Queen on the throne, and as much as I don't want to say it. If she decides to invade the Talmut Empire. She becomes your problem...not mine. Good day"