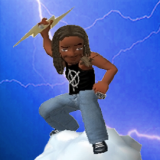 Ace Thunder fights the never ending battle for justice against the many forces of evil that exist in his world. At the age of 16, the youth rode Bronx number 5 train returning from his Grandmother's house during a savage thunderstorm. Walking between train cars as it turned sharp in to the Simpson street station. Which brought the teen in closer proximity to the third rail. Amazingly the down pour was so unrelenting it was enough to conduct the voltage towards the boy. Shocking the youth's rain soaked dreads, the electric impulses of his brain then attracted a lightning bolt. In a flash his very soul was blasted from his body, pulled up deep into the storm yet still bonded with his body due to the third rail thunderbolt and high brain usage. The 21 grams of his soul gained two more as it absorbed a portion of the thunderstorm and brought it along back into the youth's.