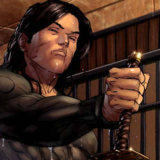 Son of the Serpent

"Thought is the shadow of feeling - emptier, simpler and always darker."

£ Superior Simulation: Nanotech deep brain stimulation of the supramarginal gyrus activates mirror neuron bundles. Mirror neurons are part of the brain that pretend to be other beings; giving rise to empathy and the ability to understand and predict behavior. The Superior Scion's nano-enhanced supramarginal gyrus simulates other life forms with speed and precision, simulating the martial methodology of 'move-reading'. He also adroitly discerns between legitimacy and deception, as his modified mind penetrates malfeasance and pretension by simulating the brainwaves of the 'other' and detecting inconsistencies between expected outcome and observed behavior.

£ Nano-induced Schizophrenia: Debilitating cognitive distortions can be induced upon demand, specifically multiple personality disorder. By triggering a series of nano-nodes buried in the prefrontal cortex Absalom can trigger a controlled psychotic break, giving rise to a scientifically calibrated secondary personality. Cybernetically enhanced, this 'slave mind' has a personality and thought process all of its own and can operate independently of Absalom's primary personality, performing complex calculations while Absalom is preoccupied with combative coordination or pondering the complexities of a Machiavellian manipulation and prepping for an inevitable conflict. The secondary personality can even take over while Absalom's primary personality sleeps, preemptively pondering the imminent future to construct an operative blueprint of decisive action, prepared when the primary mind awakens.

Σ Quantum Key: In the halcyon days long flown a C-tier supervillain named 'The Door' briefly terrorized Gothics rich and famous. He claimed to be capable of opening any door in the city to any other door in the city, formulating a mystic bridge between, say, the door of his hideout and the mayors office. Unmitigated villainy, extortion, ransoming and abduction ensued as 'The Door' struck the rich and famous of Gothic's high society.

Through unknown means the Stoic Strix has acquired the authenticated artifact which enabled 'The Door's spectacular spree of criminality. Glowing with interior light from interior quantum harmonic reactions it opens any door inside the boarders of Gothic City. It can also open that door into any other door, bridging spacetime in a method incomprehensible to modern science.

Σ Nth Metal Tattoo: Microscopic particles of virtually negligible size were mixed with mundane inks and tattooed in an occult pattern upon his right hand. Nth metal's unique properties serve to aggrandize his potent physical prowess to exemplary levels. Superior strength, speed, and durability are the product of this permeate permeation of Nth metal laden ink into his skin.

Σ Sword of Toyotomi Hideyoshi: Purportedly the blade of of the samurai Toyotomo Hideyoshi, though this fragment of historical trivia had never been verified. Lending credence to the theory is the perpetual requests of several historical societies and Toyotomo's decedents for law enforcement to procure the sword, as it is not known to be in Absalom's possession, only in the possession of his villainous secret identity.