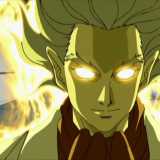 I was just wondering if anybody else on here read wolf guy. It has some pretty detailed artwork. Akira the main character is the typical i dont care but I will help type of badass. He is able to turn into a werewolf under a fullmoon, but has supernatural powers from the moon light. He is only weaken during a new moon. Those who are just getting into it compare it to twilight even though this was out in japan wayyyy before the movie, plus it is hella more violence to borderline disturbing levels. I would put it on here but there arent any pictures of all the characters.

I cant believe I didnt know about this manga. I saw the original 12ep movies back in the early 90s, Out of Control, and both whack movies. Then recently i saw the new anime that had even more content. I did some research and bam so far 26 volumes with the anime stopping at around volume 8. I have been catching up and this is some golden stuff. Dont hurt me but I like it better than Naruto and Bleach right now. Unfortunately Viz only released up volume 3...

I am a writer/artist for the most part. So I do alot of research to make sure my creations are fresh and somewhat original in certain aspects. Today I decided to introduce an alternately evolved species of man into my universe from the homo erectus, because all before them looked too much like monkeys and apes. Anyway it all just warped by mine to find out that the modern human has been around for over  200,000. I mean that is 200,000 of fighting and killing each other like common animals that set ourselves above as a species. Here it is in modern times that we have all this technology yet the same old shit is still going strong like forcing sex on someone, killing people over petty disputes, and what not. I am a fan of violence but not when actual people are suffering. This should all be stuff that we should be reading about and laughing over. Like wow humans really use to kill each other religious views or sleeping with someone else title spouse rather than finding another person to be with. COME ON..i mean nobody else is ashame of this...200,000 OMG freaking god.

normally I check during lunch breaks in the afternoon of fridays and mostly at nights.

let legends die, stop bringing people back to life. I feel comics should venture into new territories every now and again. Everything seems to pump up one character and make everyone else around them seem like nothing. Oh batman is the greatest detective but Nightwing and Robin aint nothing. Captain America is the the symbol of justice or whatever. They are just titles. Dick is Batman now and someone else can easily become a super soilder. Sorry but this has always been a pet peeve ya know.