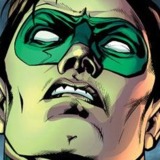 Moreover, I think DC hasn't announced all the titles post-Convergence. We know that maybe some title like Green Arrow or Aquaman are going to be relaunch this summer. So, I hope new titles will be add to the catalogue of DC too. If it's not the case, I will miss Guy Gardner and Kyle Rayner ! :(

I really like Guy Gardner but I prefer him into the Green Lantern Corps. I suppose he became a Red Lantern only for the need of the Red Lanterns series and this serie is better than ever now but I really want Gardner back ! And I really want the statu quo before the New 52 back ! Whit Kyle Rayner in Green Lantern and team-up with others GLs, whit the Guardians and their hard rules, with Guy Gardner as a honor GL guard !

I think it's not possible for budget reasons. It's not like an Arrow without any superpower or a Flash who just run very fast (and some scenes are very strange with 3D effects). We talk about someone who fly, who can construct some green plane, it's not nothing !

But if it's possible I really want to see not just a cameo, I want a serie !

Live @bezza, I love Green Lantern since I saw the movie. When the New 52 came, DC Comics delect a new editor for his comics in France (the last one had Marvel AND DC Comics and he just published Marvel because it works more than DC in France). Urban Comics - that his name - started with a lot of collection : DC Renaissance (for the New 52 series), DC Essentiels (of the essentials) and stuff. And two series were : Geoff Johns présente Green Lantern (in DC Signatures, for the author's run of a particular universe) and Green Lantern (DC Renaissance so New 52). I'm fall in love of the GLs when I rode the volumes of Geoff Johns présente Green Lantern and when I began to read our french magazine for the Green Lantern Universe : Green Lantern Saga. It's pretty good because all month I bought* the New 52 series Green Lantern, Green Lantern Corps, New Guardians and Red Lanterns in one magazine. So because of the movie because, because of Urban Comics, I debut GL and now I'm a huge fan ! I bought all the US singles of Green Lantern Corps and Emerald Warriors and I enjoy it ! I talk about GL last time with Peter Tomasi at the Paris Comics Expo !

* I buy always Green Lantern Saga but now, for selling reasons I suppose, he's trimestrial and I can only read Green Lantern and Green Lantern Corps. Red Lanterns, New Guardians and Sinestro aren't publishing unless if there is a crossover between them and GL and GLC or one other serie like Supergirl. For information, Godhead will be plublished in july and october 2015. And Red Daughter of Krypton in some Superman Saga Hors-Série magazines in january and april 2015.

But in French, I'm in Action Comics New 52 of Morrison and I really enjoy too !