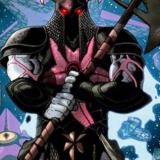 Ok like Sha I thought I would do my top battles, but this wil be shorter because lets face it I haven't battles nearly as much as she has.

This was my first real battle on the vine, and the one battle which made me realize just how fun RPGing was. I honestly feel if Tezza lol and I never had this battle I probally would never have begun to do so many battle p's, I still would have done rpg's but I can honestly say that this fight pushed me forwrad to rpg more and become better doing so.

No one will ever know, how much I had wanted to face, ever since I met her as ST in the nine lives. Ive always had a respect for Kiara and as time went on she became a very good friend, though getting that first hug and first battle was no easy feat lmao. Kiara is a beautiful writer and in this battle I feel I changed my style for the first time just so I could be on her level. Looking back now its a shame we never got to finish it because it had such potential to devolop into a story, which is one of the main reasosn it's not higher on my list.

Apart from NeVann and Morte, Tenjin is by far the best ninja on this site, and when it comes to writing these types of characters he is one of the most creative. Ive always seen Tenjin as the student of Vann, and this was one of the reasons I faced him, because I knew like Vann he would push me in each and every aspect. And thats what he did, by this point I had become lazy not just in writing but also writing descriptive fight scenes which was based more on a combat route but against Tenjin I sat down and posted with everything I had. This fight had a huge impact on my character Acer, so much so after one battle I now view Tenjin as one of Acer's main rivals.

Ok so call me bias but I dont really care. So this was a fight that took place on animevice. Now for all of you who dont know Pepper or Prima as she is known here is an amazing writer, and I dont think she knew just how talented she was. In our battle I can say that she completely outshone me, very few people can write a battle with such emotion and heart but she could. During the fight Acer was testing Pepper and in a way so was I, because I knew she was great but just needed a boost. I loved this fight and smiled through out.

This battle will always hold some signifigance to me, why? because this was not only my final battle with Soul Taker but it was my final rpg with him altogether, and I feel truly blessed that I killed him off during the KOV fighting one of my best friends the fire godess of total awesomeness. By this point I as using Acer as my main, so wanted to kill ST on a high, and I feel i did that with Nova's help, whose creative use of fire is second to none.

To all of you newer rpers, out there, none of you will probally ever meet Lya but seriosly read one of her posts, because from the moment I met her I fell in love with her character and the writer behind it. Me and Lya joined DeathValley Warriors at the same time, we trained at the same time and we entered rping at the same time, and I miss her greatly. Her writing was filled with so much passion, I regard her as one of the best writers on this site, so when she agreed to battle me I was overjoyed. This was my first time using Acer in battle, and by god was it fun, even if this battle began my losing streak especially against the ladies, but my god was I outclaseed. This battle proved if she wanted to Lya could have become the queen of battles (Yes Sha your crown could have been stolen lol)

I was on Zero Squad, she was on LAS, and back then even though I had been in many rpg's with the legendary villain team, I never quite faced off against one of it's members which was a shame because I would have loved to, and then I faced off against Shadow Huntress. This battle was lots of fun, because ive always been a fan of the character. Shadow Huntress will always be the number one death god in my eyes. Her use of her powers and skills were amazing, as was this battle despite it never finishing. In this battle I utilized everything I had larned from my past battles, using a good mixture of my skills, powers and the enviroment.

This is single handedly the most importnt RPG I have ever done, why you ask because this was the battle that for the first time I began to write much more descriptive. I didn't look at just one aspect of the battle but several, explaining in greater detail my attacks, the surrounding and the emotions felt. This was the battle that Kurrent and Morte noticed me and asked me to join Zero Squad and from there I joined Mobb Deep. Without this battle I probally would have joined Vine Villains and i would have went down a very different path than I have done.

YAY I faced the battle queen before she became the battle queen. Sha was one of the first people I met on this site and one of the first RPGers to make me feel welcome. I csnt quite remember how the fight came about but im delighted it did, because this was the battle which made me realize that I enjoyed fighting hand to hand combat more than I did using a powerful character, and let me tell you now ST during that fight was stacked with a shit load of powers. He was basically Alucard on drugs, but I battled using my brain and that was all thanks to Sha, because in that fight she was the power or atleast she was meant to be. I honestly felt I had a fulproof plan which would garuntee a win, but Sha had a better one,m while my character became human her's only became more powerful. This battle showed me one plan is always not enough, and while I lost I did it given it my all.

Ohhhhhh come on people you all saw this coming LOL. Im gonna say this now, this is not just my fvourite battle on the vine but it is my all time favourite rpg and my crowning moment not only as a battle rpger but also as a writer. Everyone who knows me knows I hate my writing but I was proud of my writing during this battle, and all that was thanks to Vann. He pushed me in a way no one has quite managed to do before (Though some have come close) This battle introduced me to the man who would become like a brother to me, and it was this battle were I began hanging with WAl and met some amazing people Nova, Obi ect. Never before have I put so much of my heart into a fight, I never slacked once or became lazy, I got away sat down and focused. Hell I studied each of Vann's pararaphs 20 time over, just so I could hit every point in great detail. Back then me and Vann were trying to outdo each other, each post became bigger and better than the one that came before. Never before have I been more descriptive and more inventive with my characters powers and skills. This one battle began ST's and Acer's bond with NeVann and Obi (The three musketeers) Seriosuly a battle started the brotherhood. There is two scenes in Naruto were Sasuke and Naruto say that people can often understand one another more by clashing than they can with words, and I feel that explains this battle perfecttly, me and Vann understood one another more in a battle than we ever could just talking, we became brothers from it, and ST giving Vann his sword as he dies will remain one of my favourite rpg moments. I seriosuly wanna thank him for pushing me forward and giving me one hell of a fight.