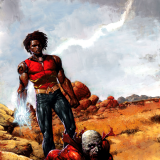 My milkshake brings all the boys to the yard

SORRRY FOR THE DELAAAAAAAY, work is killing all of my time off. But posted.

He wanted to be shocked at its pace. How quickly things had escalated, but he wasn't. A few moments of nostalgic excitement, and an instantaneous reversion to the introverted nihilist that he'd devolved into. Sojourn, had lost his touch. His mind dulled by apathy. It was in this space of emotion or lack there of, that the true dark thoughts come and sit with you, have tea and stay for a while. They create an inner dialogue that one's former self couldn't recognize, or fathom. "Let it be the end. Just let it all go"

But it wasn't until that voice had shifted. The calls to end it all were echoing louder, banging against his psyche. There was no soft command here, it was a deliberate order. And as the sky grew black with unnatural clouds, he watched as her body took form from the whispers of years. Truly, she was a sight to behold, beautiful and destruction incarnate.

Sojourn, was frozen, not by fear or any emotion really. Part of him, a large part of him wanted that creature to destroy it all, including him in the process. But as the saying goes, the faith of a mustard seed and all that...the small part of him that wanted to fight again, wanted to see the good in the world again lingered, and ultimately prevailed. He was older and wiser now though. This time around, there wasn't an ounce of fame he searched for, really, he figured that after this was done, it would all end the same, but fight on he would.

With the utmost haste, the fields had been overrun with denizens of shadowy hell. They take form of things we'd recognize and fear, a most useful talent in the way of concurring and dividing those who would topple your attempts at world domination or destruction. Surround him now, one in the form of a hellhound leaped forward, aiming to maul Sojourn's abdomen, intent on causing lasting pain and sorrow. Just barely escaping such an attack, he regretted the rust on his bones. But, the water was his ally, his salvation. Desiccating the surrounding grasses and small shrubbery, Sojourn used the water to form a defensive ring around himself, projecting a tendril out offensively, lashing at the creature. Like riding a bike, the mindset of a warrior took hold, and the world he used to love meant just a little bit more to him.

@rina_redarrow: Thanks so much. I appreciate the compliment.

ALSO... EVERYONE IS DOING A PHENOMENAL JOB. AND I"M SO GLAD TO BE HERE

I guess under these circumstances, it's good having an all powerful celestial being on your side...well on my side...on my inside..s. After all these years the inner dialog he kept with himself was still enough to satiate his need for interaction with other living creatures. Some may call it vain...Sojourn would also call it vain. Call a thing a thing and move on with it all. Anyway, with the power of the Oracle Force, Sojourn was able to teleport directly Stonehenge. About a mile out, his physical essence stopped abruptly. He could feel that others had already arrive, and they were of negative spirit. Taking only a moment to allow his physical form to override the brilliant light and energy that enveloped his body in cocoon fashion, he settled to the earth below and touched foot to ground for the first time in years. Admittedly it felt good.

There was a definite stench in the air. One that one can only grow to notice with years of experiencing it's fowl odor. One that didn't exactly smell like one particular thing, but was rather the remnants of what happens to a soul when it is turned towards evil. He could see their bodies, almost see the harmful energy they effortlessly carried, jutting out, piercing the air like javelins complete with ornamental bloodied heads.

It was a feeling he'd sadly gotten used to expecting from more and more people as time went on, and people revealed the true nature of mankind. That was, that humanity is inherently evil. Sojourn didn't used to believe that.

Still, with every step closer, the energy felt less hostile than he remembered. A cease fire had apparently been called for this gathering. Closer, he recognized many of the faces. Most of which he hated to see. Hearing them speak, there was an obvious topic of discussion, the thing we'd all felt coming. You don't spend a lifetime fighting the good fight without developing a fine tuned meter for chaos. Arrow, Darkchild...to name a few...was almost enough to make a feeling of nostalgia worth coming here.

His face, contorted for a moment, shocked and appalled at his momentary freak out, over a human, one of the things he'd given up on. But still, seeing a hero, one of his own personal heroes, brought out some sort of emotion...He thought it excitement. Addressing Kurrent directly, @kurrent"It's good to see you, even under the circumstances."

Posting today! We started restaurant week, so I've been incredibly busy as of late.

posted... be gentle and kind

I don't know where to begin. It's just been so long since I've had this feeling...of humanity. I'm here, in a place of no real significance, floating aimlessly. I've become a wanderer, ever more so than I could claim before. This place, this space of my mind that I find myself steeped in has consumed me for a number of years, I stopped counting...I never started counting. I gave up on them all. They were all efforts in futility, a constant push again the raging waves of inevitability that no one can put asunder. I decided to stop fighting. To stop caring. To just stop giving a [expletive]. I can't remember if I ever even did at this point, or why.

And yet, here I find myself thinking about them. The humans. Their vacillation between doing what is right and wrong, and doing anything at all for that matter. I never understood why in so many opportunities given between the two, they chose poorly, wrongly. Who am I to judge...A god damn force of nature that's who. But even that didn't matter. My power, in all of its awe was nothing in the face of sheer human error. In all those movies, when the villain wants to destroy humanity, a part of me rooted for them...Knowing that humans will never learn. And the worst part of it all is that they're fully capable of learning to do what is right and just, fair and equal, and still will choose a deliberate bad thing for themselves; for their children and friends and family. It's infuriating to save someone and find out that they went to jail for stealing someones purse, or beating their child to death. It's like, why even try y'know. So I stopped trying, and stopped caring, stopped remembering why I wanted to save them, what drove me. Nothingness is certainly better than constant struggle and disappointment.

But it came to me in something like a dream, something like a snide smirk, mocking my current state. The oceans of my body collected upon the memories that I once had, those very same memories that I gratefully dispelled from my essence. Creeping, licking at the back of my neck with hot breath, they made my skin crawl to to have them with me again. I thought my former self plain stupid to revel in victorious days. Some call it cynical, I call it the only logical choice. But the feeling soon became strong, violating my armor shell of loathing and disconnection to the real world. "But there is nothing I love there anymore..." Involuntary compulsion turned my thoughts towards action. Stonehenge.

Howdy (I will say, it feels so odd writing this way after so many years...definite rust and ricketiness)

Hydrokinesis: Absolute control over the liquid substance of water in all its forms. This included but is not limited to sublimation, breathing water, forming it too will.

Liquefaction: Can reduce own physical form to water. ( Does not extend to other physical bodies)

Flight: Secondary mutation. Speculated to be tied to hydrokinesis, i.e. flying on latent water particles in the air, but has not been tested or proven.

Telekinesis: Imparted by the Oracle Force.

Oracle Force: Think the Phoenix but with water....(Pulling this out the annals of my anals)

Quick Bio: Sojourn; born, Avery Spottswood, is a mutant whom at one point in his life, his only desire was to be a hero. His wish was granted when his power activated. Going through several incarnations of himself, we find him living a modest life.