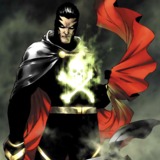 Today is the day Internet at school finally started working...

Today is the day I've been a registered Viner for 6 months...

And finally, today something...unusual will happen, but I don't want to tell anything about it yet, maybe at some later point.


Feel free to congratulate me ^^

If I've ever cried reading a comic? Well, not exactly...though I was close to cry when I read the book version of Crisis on Infinite Earths, at the part when Supergirl died...and at her funeral. It was a bit touching.

Well...I have to go with two of my favorite DC supervillains.


He controls time, he has many aliases including a renegade Controller and Cosmic Boy. He causes fear among the Legion of Super-Heroes. He has the ideal supervillain look by the way, how could you not be impressed by an enigmatic being dressed in a purple robe and hood?

And the second one...

After years of seeking the anti-life equation, he has finally found it! Fear him! By the way the glowing red eyes on an evil person are almost a cliche at this point, but Darkseid pulls it off nicely. ^~

School has started...I won't be around quite as much as otherwise... v_v

This has some good and some bad sides to it.

Bad thing: New school, I hardly know anyone. Good thing: More enjoyable subjects (programming, web design, etc). Bad thing: Must get up really early. Good thing: I get to borrow a portable computer and if I am careful with it I may get to buy it when I graduate. Etc etc...

Yeah...so...well since I won't be around as much I may not be able to talk to you people so much....you're welcome to talk to me in PMs and I'll respond asap. Uhmm...yeah, see ya.

If they don't, they must be blind and deaf...after all, I even made one of them join the Vine ^^ (even though he's hardly ever on...)

Hey people, I got a few things to say. The recent tragedy made me think about some things.

1. We humans show way too little appreciation. So here is my appreciation of you: I love you people on the Vine, you've brightened an uncountable numbers of days when I otherwise would have been extremely bored. I appreciate you all for that, thank you! Group hug...hopefully

2. If I would die within a short period of time, I wouldn't want you people to mourn and be sad too much, you can remember me and all but don't overdo it. Please, don't let my death prevent your happiness ... Oh yeah, when I die (or leave the Vine) I want my character to be written out in an RPG as if I sacrificed my life to save the Universe or something...yeah, hopefully that's not too much to ask for.

Yeah, that's pretty much it for now.

Jean Grey/Dark Phoenix.
Dark Phoenix Saga was a great story...it was basically that which made her my favorite X-Man...

...from Internet. I have one subscription (Legion of Super-Heroes), and I happen to order trades sometimes. Trades I have now include the first 5 Legion trades (current volume) and Kingdom Come. I'm gonna order Superman and the Legion of Super-Heroes and Sinestro Corps War at some later point (when I can afford it). Other trades I'll order when they become available will include Final Crisis and Light War/Blackest Night. ^^

As you MIGHT have noticed, I've started writing a new bio for Twilight Man (but it's just not entirely done yet).^^ The powers will be mainly unchanged (I can't think of any change I will make) it's just the story that is changed from a slow one to an...uhh...less slow one. XP My only concern is that the new story can't take effect until The Gift and the Curse and its possible sequel is over... x.x

Anyways, feel free to comment on the new story...^^