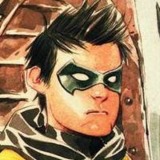 Well it happens, I'm feeling down. I got sunshine in a bag, I'm useless but not for long.

After the Jughead cast, I decided to check it out after all.

They I hope that they stick to classic Jughead who eats a lot and doesn't give a crap.

Yeah, but he used to draw a badass Batman. I liked the machine gun cover but it wasn't great. Same thing with the Carrie Kelly one.

It could have been better. I feel like Lee is lacking in the cover department lately.

@_vex_: @nikademus@charlemagne@feral_nova@shanana@satar@felix_faraday@honor_avenger@mercy_@pyrogram and @whoever else cares.

The day was colder than usual, little droplets of snow were falling from the aftermath of last night's storm. The streets were infected by the ice to the core. People who tried to walk over them fell on their backs. Some cried and some laughed, one thing was constant, they all felt something from the fall.

There weren't any preachers inside giving a sermon about passing on and better places, where angels stood and played trumpets on top of the pearly, golden gates while a vaguely looking man with a beard or a list (presumably St Peter) allowed you in or kicked you down to get pitchforked for eternity.

No words could describe the ceremony for a Knightfall burial. Some were there with skepticism and only appeared out of formality to say "See you later" or to confirm that he was truly gone from this world, due to the infamous ability for the family to constantly cheat death. While other truly felt the gravity of the situation. Mark was dead, just before his eighteenth birthday. He took his own life to break the chains from the Liafadors and the Knightfalls. For the second time in years, he was having a conversation with the Grimm Reaper for the last time.

For the second time in years, he was having a conversation with the Grimm Reaper for the last time. Maybe they were enjoying the few moments they had together, there were questions to be answered.

Whether his soul went to a more peaceful place or the opposite was heavily debated. His actions before his death were questionable, in his heart, he believed to be an agent for the greater good despite constantly denying it.

A dead silent was in the room. The ebony casket stood in the middle with a self-portrait he painted when he was eleven years old, open for the cynics and the spitters. Everyone was waiting for someone to say the first words.

A reptile dysfunction? I'm going to use that bow.

Five bucks say that Miles and Ms Marvel date, and then break up, or at least show some level of attraction towards each other.

The first three descriptions bothered me but I screamed on the inside with Jughead's.