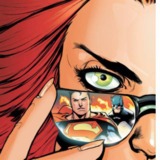 So, it appears I have totally forgotten how to write...

My name is Chevie Lockhart, and It's been three years since my entire family disappeared. Those they called friends assumed them dead, the compound were they housed mutants, who needed guidance and support, was knocked down and a new school built. The only thing they left alone was mothers underground lab, the one that she gifted to @honor_girl before she and dad took us to find mothers home world.

Three years I have spent travelling the world, travelling dimensions and other planets, searching for some evidence of my parents... but every lead has lead to a dead end. It's time I went back to the beginning, back to the place I was born and raised, back to the family of people who my parents once called friends. To pick up where my mother and father started, to lift the mantle of the Redhead and don the cowl that my mother created.

I just have to find where it all began first...

"Those were my favourite boots you asswipe!" Chevie screamed and hurled the acid burned purple boot at the creatures head. "Die already won't you!!" she shoved the blade into it's neck one more time, as it's acid saliva oozed out onto the floor she managed to duck out of the way before she lost a toe. A loud hissing sound emitted from it's bilious belly and it huffed onto the ground. All air escaping from it's body, all magic dying with the creatures death, only the flesh of the human who'd been changed remained. "Ew" the teenage girl leapt away from it and scampered to the right, the body slowly began to dissolve as the acid burnt through the remaining flesh "Sh*t" the blonde exclaimed as she ducked down with an adamantium container and scooped up the flesh for study later, screwing up her face with the smell she sealed the lid and tucked it away in her bag.

Slipping on a pair of thongs she rolled up the torn edges of her jeans and straightened her jacket, zipping it up over the damaged shirt underneath. Sighing deeply as she threw away the Mars designed boots. Stepping out onto the streets of New York, she immediately blended in with the crowds, pulling her long blonde hair into a ponytail.. wondering where best she could go to get it analysed.

"One hell of a first day back on earth" she muttered as she slipped in her ear buds and nodded along to the music.

(Excuse the rather crap writing, it's been a long time.. but I wanted to get out there what the new changes were :) )

Are we to knowledgeable for our own good? (Comic book movies)

So we saw Green Lantern last night and I admit I went into it with limited knowledge of the series, I have only read a few issues and seen the cartoons. I love the series and am dying to read more, but with baby coming we are on "no comics" ban so I am behind. I was excited to see the film to see what they did with it, and of course to see Ryan half naked (Don't worry Arrow understands) and from the beginning I was happily enjoying the film, Ryan was doing Ryan and was not at all how I pictured Hal, but hey it was fun.. and then.. things started to go a little sideways.. I won't use this as a place to vent about what they missed out as we will be here all day and there are already several threads designed for that.

I will however look at how the movie could have messed me up if my husband did not have extensive knowledge of the series..at parts even I was like "err isn't Hal not really about those kinds of constructs?" and had to ask what the real story of Parallax was.. and more.. it got me thinking about other recent CB movies that have "altered comic reality" to suit the story.. Iron Man and Tony coming out telling everyone that he was well.. Iron Man is a big one, my ever long suffering mother even decided that was what happened in the comics because it happened in the movie.. so it must be true!

If I was an ignorant movie goer with little to no knowledge of the comics would I enjoy them more? People who I know who have seen them without prior knowledge just happily enjoy them without sitting there thinking "Batman would never sound like he has throat cancer" , "Hal is not like Deadpool", "Superman could NEVER stop a plane and carry it to earth" (ok maybe he could but I just hated that movie) "Nick Fury should have been played by George Clooney" (ok that may just be me...)

As an avid Batman DC girl I have to admit I am scared about the next film, scared for what they are going to do with Selina.. and Talia.. but wonder.. would I be happier if I knew nothing and just figured that it would be a re telling of the delightful film with that blonde lady that had the stitches on her suit...

SOO guess what I am asking is, would we enjoy CB movies more if we were not so aware of how the story and characters should be?

Someone get these references OUT OF MY FILMS! (Rant)

The last oh I would say maybe 15 years of film have generated a trend that is becoming ludicrous, overly referencing your fandom in films!

Referencing other films in your own is a time honoured tradition in film, god knows Tarantino would be at a loss for ideas if he was not such a fan of Spaghetti Westerns and Asian Cinema, and who can forget the great scene in the Untouchables where the baby carriage flies down the stairs, mimicking the famous sequence in Battleship Potemkin, paying homage to an old film is a great way to give a slight nod to a favourite director or film, but these days its so blatant its almost as bad as product placement in cinema.

I watched Paul with my husband and we sat there counting references, by the time we got to 100 we were bored of the game and lost interest, that is the ones we could actually pick up, the more obscure Sci Fi we were sure to miss as we are not big fans of the genre. The film was RIDDLED with them, it was so blatant even to the point of having Star Wars music from Jabba's craft as the entrance music into a street side restaurant or shop (I forget the exact place) It was almost as bad as the excessive lens flares in Star Trek.

I am yet to watch Rango but all the reports I am getting are that it is little more than one big homage to Westerns.

Is it the new product placement? does it give film buffs some sense of elite awareness that transcends their experience of the film? Happy in the knowledge that they are the only ones who could pick up on the incessant placements? or is it just another way that they are dumbing down our cinema experience, giving us little more to work with than a shoddy script and a few dozen handfuls of re capping of films we once loved but that are now so overly referenced that they are loosing their shine.

I used to love having to work hard to find a reference, spot a character deference, even a small tingle of music that was a hint to something old, these days it may as well be turned into a drinking game.

(Original Blog can be found on Screened)

It's rare that I will take the time and effort to promote a novel, even if I am a rampant reader who consumes books faster than a block of good chocolate, but these simply need to be promoted!


I discovered these through my darling husband who spotted the novel in a magazine we occasionally get Sci Fi Now he ranted at me about it and ended up making me "begrudgingly" purchase the books from our local Waterstones, after a few failed starts on other books I deigned to pick up the book and give my whining husband a chance to thrill me with his suggestions.. and by god did he ever!


For those of us who are madly in love with Mr Darcy, long to be part of a world where a day dress is formed with silk and taffeta teamed with a darling little hat, bustle and pair of hand woven gloves, where men were men who fought for your honour and tipped their hats at you then these books are the right direction.. but then the wonderful Author Gail Carriger decided to add a little bit of Supernatural, some handsome as hell Werewolves (that leave our darling Mr Darcy wanting), a flamboyantly gay Vampire, a lead character who is curvy, smart and just a bit lacking in the SOUL department...rounded off with a dollop of Steampunk... you get one of the most amazing stories I have ever read!

I have not stopped gushing since I began reading them and am now onto the third book, having been left with a breathtaking cliffhanger, I simply do not have much more time to write this blog as I have a book to read!

I have yet to allow husband to read them as he is hoeing through his own Drizzt books so I can not say if they are "male" suitable, but I can tell you they are superbly written, with great wit and class, deep and well thought out character description, exquisite settings, delightful humour... god I could go on.. Just go out and get them and start reading NOW! they are not for the faint of heart, the detail and description is wordy and well thought out, so if your used to reading simply books, I would avoid ;)
16 Comments

I can not remember all my alts and am currently on a mission to try to remember as many as possible! SOOO if you can do me a favour and add to the list I WOULD LOVE YOU and maybe give you a treat!

So far I have

The Real Life Fortress of Solitude....

The 8 most uncomfortable sexual moments in comic book history

This guy has become my new hero...

WE ARE BACK AND MARRIED!!!

And as promised here are some pics, we have more coming but we did not have a PRO photographer so these are just random photos taken for us!

(please excuse the title, my images are not working properly and it took ages to work then I stuffed up the title v_v)