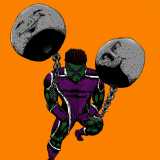 Toronto is often seen as a quiet city compared to the regular occurrences of superhuman activity taking place South of the border. Although, as people can attest to, the superhuman and mutant population are by no means small, however the percentage that engage in vigilante and criminal activity is significantly smaller than Those in the United States. Some explanations offered are that superhumans with such aspirations immigrate down to the U.S.A. due to how better established super-heroes are in the country. Another argument is that Canada’s superhuman go largely unreported due to a combination of our low population density and there being a lack of active public vigilante organizations. Either way the city of Toronto was shocked when it was revealed that not only was there a superhero keeping a watchful eye over the innocent, but that he was also taking their phone calls as well.

Chain-man has been a presence on the streets of Toronto for almost a year now, taking calls and now Facebook messages from citizens in need of help. Many criticisms have been leveled at him as he made his way into the public view. Some worry that his presence may eventually attract worse criminals into the area. Many people claim to have been assaulted by him witnessed him performing illegal activities. On the opposite side, there are still a great number of people who tell stories of being saved by him and picture have surfaced of the Chain-man rescuing people during the flash floods on July 8th. It becomes difficult to paint a picture of someone when they haven’t even been properly talked to. That’s why, through luck and much waiting, reporter, Katy lush managed to snag an interview with Toronto’s vigilante.

Thank you for taking the time to do this interview. I hope this isn't interfering with your services.

Thanks and you probably aren't. In the advertisements I try to get across that calling me won’t help you in a situation that needs to be solved right away. The immediate emergency number’s in the cell phone I have on me.

So you could get called away at anytime?

Yeah, it’s just a superhero thing really. Being one guy and all. The tunes nice and ear-wrenching so I hear it no matter what.

In that case, let’s get right to it. How did you first begin your career as a superhero?

It’s nothing, It’s just I was rehearsing the answer in my head and it still comes off weird. I’m gonna have to leave some stuff out, given the whole secret identity and what not. I was born in America probably, no one’s was sure of that. I was an orphan and got adopted, usual stuff. My foster parents raised me for a bit and then the city I grew up in had it’s go at me. I fell in with a bad crowd at a pretty young age thinking they were my friends. They tried to throw me off a bridge and a guy I’d never met managed to save me. He wanted to make a deal with me. I wasn't all that great a kid you see so he figure I either help him or face the consequences. Well, being a kid I decided I didn't want to face the consequences. He taught me and now here I sit.

So he forced you into it?

Well, I wouldn't say that. More like nudged me in the right direction.

What were the consequences?

What were the consequences if you hadn't made the choice to work with him?

Would this stuff be in accordance with the law?

I- Okay, trust me when I say it was the right thing he did for me there. I went out and I learned from him. He made me do the right thing and changed me for the better. Because of him I met good people; heroes that showed me there are different ways than just one to be a superhero. Not everything the guy did was right, I admit that, but he did what he thought was right. I aim to do the same thing here. I’m doing this because I want to do this because every single element in my that I appreciated has wanted me to do the right thing and that’s this.

Oh, he also died too. I feel I should put that part in too.

I’m very sorry to hear that.

If that’s the case then why do you have people pay?

Honestly, It’s because I need the money. When I started out here, I didn't think I’d be able to hold a job along with being a super hero. Unfortunately being immune to starvation and eviction are not one of my powers. Seemed like a fair compromise.

What if they can’t afford to pay?

This is something I run into a lot. If they can’t pay at that moment they can choose to pay it back monthly or pay it in full at a later date. If they’re really down on their luck (unemployed etc) then I generally let them go. Probably bad business sense, but I can afford to do it as long as I stick to my basic needs for awhile.

Why did you settle in Toronto as opposed to somewhere like New York?

They don’t need any help there. They have so many heroes that the papers don’t even try to keep track of all of them. I wanted a place that really needed me, but was close enough so that travelling to meet clients across the border wasn't a problem.

So you accept jobs outside of Toronto?

Yeah, of course. As long as they keep in mind I’m not some hired mercenary or assassin. I just want to help people, no matter how big or small the problem. Besides, I like to exercise my dual citizenship. The guys down at City Hall agreed to it as long as I or the client supplied the transportation.

So it’s true that you are supported by the municipal government?

Not supported really. I shot up the idea and they approved it as long as I divulged my identity to some of them. As long as they keep behind locked doors I’m fine.

Why don’t you want your identity to become public?

If that happens I risk being harassed and attacked by people who aren't happy with me being here. Not that great. I also have family here with me and I’d like to know to be sure that some irate criminal isn't going to come up to them on the street and do something regrettable because of my choices.

This brings me to another question on people’s minds. Do you think your presence here is causing more criminal activity in recent years?

Yes and no. I think I’m forcing more criminals to the surface so it becomes a lot easier for everyone to see those, making it seem like there are more criminals than ever. I’m not creating a problem, there already was a problem. A very well hidden problem that requires some guys and girls in tights and a mean right hook to bring it to the surface.

Well, yeah. But wasn't that going to become a problem eventually? Someone was going to realize how easily they could rob a bank or kick a puppy with no one to stop them. I figured it’d be best to start off with a hero.

You’d think you would be able to stop them?

If by stop, you mean, send them to a jail that deals with superhumans, yeah. The way I see it is the strongest bad guys found empires on far off islands and threaten to take over or destroy the world, stuff like that. They immediately get noticed and so many heroes through themselves at them that it’s a surprise that they don’t drown before anyone gets a punch in. The guys who rob banks are generally pretty much within my power to stop.

Speaking of power. in the add you have in the papers it says you have chain powers?

Oh, yeah. I can shoot metal chain links out of my body. They don’t rip through my skin or anything. They sort of phase out of me. I’m not sure how. Never asked a doctor about it. I can also get them to detach from each other. For the most part I use it to swing around the city.

But you’re completely covered by your costume.

Well, you see these tucks in my uniform. On the purple part. They’re separate strips folded over one another, which allows stuff to come out really easily given enough force, but actually makes it harder to get things in past it since it’s doubling up.

What, where are you poi- Oh (laughs) No, no. That’s part’s not separated and I’m only planning on having things shoot out from there during ventures into the bathroom.

Any other skills you bring to the table?

I’m pretty decent when it comes to boxing. It helps if I get a little creative. I've trained with an acrobat and have met plenty enough to know what I’m doing on a rooftop. I also have some swords training, but those only come out at barbecues. Oh! I almost forgot about the metal balls!.

Two big heavy balls I carry around in case I run into some guy the fortitude and personality of a brick wall. I brought them here, see?

Um, okay. Why do they have faces?

My little cousin drew them. I think it’s cute. She calls them Whinny and Humphrey.

Yes, very cute. Actually we’re almost out of time. Do you have anything you’d like to say to those reading this?

Okay, sure. To all readers out there, I want you to know that I know you don’t trust me yet. You’re probably thinking that this whole interview doesn't have the complete story on me and that I might be lying. You’re both right. I stretched the truth to keep things hidden and kept other stuff out entirely. Why? Because I don’t trust you yet either. These are the little tidbits you get because of my sunny disposition. Maybe if you invite me out to a nice dinner some time you’d get to hear the rest, but really if we can’t call each other friends by the end of it then there’s nothing else about me you’d need to know.

That was very interesting. Thank you for your time.

Thank you, Ms. Lush. I really enjoyed this.