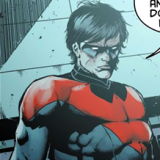 Knightwing remained silent throughout the briefing, barely bothering to regard Mitchel, his eyes on the floor. Garbed in his skin-tight costume which was comprised of red and black, his bö staff compressed within a pouch across his back, and his face obscured by the long cloak he had taken to wearing at all times. Upon being selected as one of the mission's antagonizers, he discreetly rejoiced, savouring the chance to unleash himself for the first time in months. But, as he had for his entire time upon the vessel, he remained apathetic, pushing past his fellow candidates, taking a seat within the helicopter, folding his arms across his chest and lowering his head, completely blocking out everything else.

His boots kissed the hot sand, a large cloud of the stuff swirling around him as the 'copter rose into the air, leaving the four members of Genesis Incorporated behind to fulfil their duties. Covering his face with the edge of his cloak so that none of the fast moving sand struck his skin, he straightened up. After the mini sand storm had diminished, he discarded the lapel of his hood, steadily taking in his environment and surroundings. He noted every little detail, keeping it stored within the databases of his mind. He was about to break away from the group when the large fellow, Ajax, broke the silence with his heavy voice.

"I'm not going to try and lead us, as I don't believe myself to be a leader but we have a hard mission ahead of us. I suggest we utilize guerilla tactics while also exploiting the weaknesses of our team mates which we are now pitted against. For example, for Quickster I'd recommend staying in dense forest area as he is bound to trip up or get caught on something. We also possess incredible skills and abilities, but we need to use the environment as a tool as well. Most importantly we need to work as a team here and show what we can really do when we work together. Anybody else have any suggestions or ideas?"

Knightwing stared at him for a moment, distaste smeared across his features. Turning away from him and the group once more, he took a few steps towards the forestry situated a few hundred meters from where they had landed. He spoke without looking back, leaving nothing but his comment behind.

"Do whatever the hell you like. I'll stick to my own shit, thanks."

Probably bullied as a kid.

The behemoth sea vessel strode through the placid water; pure liquid darkened by the night sky. With only a few of the staff awake and patrolling the decks of the meta-human carrier, the pilot steering the ship with ever-relentlessness, tranquillity seemed to bathe the atmosphere. The minuscule waves lapping against the hull of Nova Invicta were the only discernible sounds besides those of a wooden paddle dipping in and out of the water, slowly but steadily propelling a small wooden raft towards the ship. The wielder of the oar stood stoic and silent, his muscles pulsating beneath his long sleeved shirt, working persistently to move the floating ocean vessel towards it's much larger counterpart. The figure seemed draped in a ragged cloak, obscuring his face and a vast majority of his torso. His trousers were drenched. The moon was eager to cast some light on him but his shadowed face prevailed a moment longer, before he raised a single arm and pulled back the dark material, revealing a handsome young face, pale skin glowing in the night's torches.

The bobbing platform scraped against the surface of Invicta's hull, and after regarding the sheer height he'd have to travel, the figure leaped up, small black disks clasped tightly in his palms. They emitted bright blue lights each time they touched the ship's skin, managing to keep the young man stuck to it. Not moments later, he put a leg over the railing of Invicta and then another, pocketing his magnetic tools. He gazed at the sight of the vessel, now revealed in all it's true glory, and then he blinked, remaining apathetic to the wondrous scene.

The mysterious newcomer, draped in darkness as he made his way through the quarters, halted abruptly before a door clearly marked with a collection of letters. Or, a name.

He whispered his moniker as if he hadn't heard it in aeons, giving the plaque an intense stare. Reaching into his trousers pockets, he slipped a key-card across a panel beside the door handle and entered quietly, leaving only a trail of water in his wake.

YC vs Nightwing and Red Hood