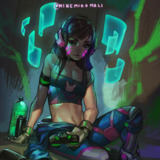 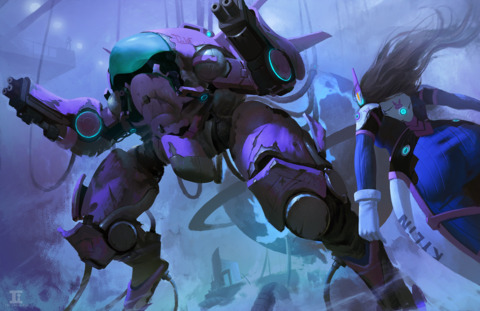 Bio: Born in Gothic Lizzy had a particularly hard time growing up though perhaps it's all to common in honest given the status of the city. Diagnosed with brittle bone disease as a child and having a family that could barely afford food let alone health care she rarely got any help with her sickness. Most would just slap a cast on or be quick about snapping bones back into place and so on. Though usually done right it was never as thurough or good as it arguably should be. Older she got the more questionable people took a liking to her and naturally the more she was surrounded by troubled youth. Nobodies fault really, just a good chunk of students are going to make a turn for the worse when the worst is all around them. Eventually she dropped out of school hurt to often do to the disease and way of the city it was to costly to continue. Didn't help that she was terrible at most classes, despite being incredibly smart she found it was only through deconstructing. She had to break things to understand them, over analyzing books, solving problems backwards, and usually having to disect electronics like it was biology instead of a tech class. To much to handle schools didn't want her around even if she could afford all the medical bills racking up from fragile bones.

So instead she became synonymous with streaming sites and the like, video games becoming a major part of her lifestyle. She studied nursing to try and keep up some semblance of an education while making gaming into an improvised occupation. When it came time to evacuate Gothic a improvised streaming vlog was watching a good portion of what was happening thanks to her. And of course with it becoming apart of her life style so extensively she was quicker to pack her various electronics over clothes or provisions. Upon returning to Gothic though she was sent an email. Linking her to the location of a relatively forgotten by most, but icon to her, previous costumed figure. Sara Mania was a draw to the gamer and someone with a crush on Lizzy was all to willing to point her to the suspected remains. Finally the streaming starlet would be able to take action instead of living through monitors and a game controller.

Slipspace Technology: "Slipspace technology, it's speed active in a nano second, close the nano second after unless desiring to hold it open. Function to create a opening into a absolutely controllable spacial pocket. Be it merging one of these pockets to another, placing it in another, or opening it within limits its practicality has proven various. I use it for a variety of uses ammo energy so on. Area of effect is as small as the atom or up to a twenty foot radius within the xyz axis. It's pull rivaling that of a black whole. While non lethal usually in ammunition, it can be set to draw in things within the smaller dimensions allowing the project to burrow through most materieals thanks to the force of a black hole. It is important to note that as well its AoE (Area of Effect) can be managed should it be desired.

Ammunition Variation: Within the guns of both her own, drones and Mjolnir is the ability to change the ammunition almost on the fly. Do to pockets of slipspace over standard magazines she can rotate on the fly to the desired resource. Using a small collective of nanites to alter the rounds for a series of affects on the projectile in question. Standardized ammunition is 20mm Lizzy optimized the new PGU-28/B round developed in the mid-1980s and looked to add it to her own standardized pistol. A semi-armor-piercing high-explosive incendiary (SAPHEI) round, providing improvements in range, accuracy, and power over the preceding M56A3 HEI round. The PGU-28/B is a "low-drag" round designed to reduce in-flight drag and deceleration, and has a slightly increased muzzle velocity of 3,450 feet per second (1,050 m/s). Second option is just the (S20) or a round without any modification. Third selection is (R) Rubber pointed ammunition that while possibly bruising or even breaking bones from impact won't puncture skins or organs. Next alteration to the ammunition variety is plasma coated or plasmic or (PCP) where in the place of a charge is replaced with a small nano machine accessing slipspace, through this a projectile can move from simply burning to blazing at five thousand seven hundred seventy eight kelvin. (ST) Slipspace Transition is the next in the lineup casting the effects of Slipspace at the desired range so that it might contain the target in a pocket dimension, or alter how things might go on the battlefield such as managing heat or shockwaves. (STP) Slipspace Transition Point is the use of minimizing the projectiles AOE or area of effect to being no more then the radius of an inch so that the projectile doesn't pull a target in, but rather its draw is so small that the round becomes an advanced armor piercing round.

Project Overdrive: latest design of the engineering gamer was something special to Gaige but perhaps small and meaningless to others. Outfitting her suit and Mjolnir with inertia dampeners was the first step. Making her uniform and mech something that could protect her from the speeds and G forces and so forth that came from the design. As well as maintain motion that otherwise couldn't be done. They didn't provide much in the way of practicality in a fight necessarily it was more for functionality. It was great however when paired with the Friction Negation. Using her work from the Gekko she reversed it to understand friction. From this came an ability to manipulate friction shutting it off and on she now could run along surfaces she otherwise wouldn't. To flow in motion beyond the confines of physics mixed with a bit of the Gekko and Van Der Waal forces to adhere to plains she couldn't otherwise. Now she could run up walls, treat tree branches like a ramp. It was liberating for someone who for so long was almost afraid just to walk.

GunBlade: Mounted on finger tips of her gloves in a small compartment or in Mjolnir's hands is a improvised grappling hook with eighty feet of range and a claytronic cord, or in the mechs case hand based weapon system. In the case of the gloves the cords are stored extending over the fingers and entering into a slipspace pocket on the back of the wrist and makes use of Van Der Waal Foces, or VDWs for short through a method of electric dipole brought on by nano machines for its desired effect. The Gunblade uses this unique force to generate the desired equal and opposite charge of a target through the microscopic machines recognition to create whats best described as sort of organic magnet. This hook, or in Mjolnir's case spear like talons launch a bladed slug much like a large nail uses this effect to make targets adhere to a surface with incredible force despite an otherwise generic ammunition choice. Further the blade or it's spear was to stick into a target the harder it'd become to remove.

Overshield: Able to tank up to a nuclear warhead equivalent of explosive force in Mjolnir's case, half of that in Lizzy's own the overshild coats the body or mech in a field of kinetic energy absorption and displacement spreading the effects so as to avoid physical harm. It takes about fifteen seconds to recharge, though time before back to full is dependent on damage taken obviously. Housed on Lizzy's shoulders or in Mjolnir's case projected through a series of points, one on the back and one on each limb.

Portal: After some studies of a particular mechanized spider and some collaboration of ideas with a scientist in France Lizzy devised an ability to allow her to phase through matter. Applied over mech and armor is a series of nanites set to cast an blanket of slipspace over Lizzy and Mjolnir. From this she can temporarily remove herself from the physical plane traversing into slipspace. Managing this can then lead her to phase through solid matter through essentially a distortion of time and space. The few complexities however come into effect by doing this. One her body or Mjolnir will glow with a luminous white light it is far from a stealthy action. It cuts off perception to the physical world, though that can be compensated by drones when she has them. Lastly if something was simply indestructible or to durable to take effect the results could be disastrous. It is highly experimental and operates very much on a notion of high risk for high reward.

Spawn Point: as she'd call it a piece of hardware and software that would function and aesthetically look like a backpack or flight jacket. Unraveling from the bag however would be pockets upon opening the main flap or just in its entirety would allow for the dispatch of the numerous drones of which Lizzy has favored using in the past. She'd need to use these both outside of Mjolnir and when within so this would help make sure that was a possibility. It otherwise was a simple creation. Not every piece of tech was a marvel unmatched, this was just to main the practicality of combat scenarios. As for the drones in question she'd chosen to stream line her design, just management and combative, combative having two variations. These nodes for drone dispersal are on the back of Mjolir's shoulders in the mechs case.