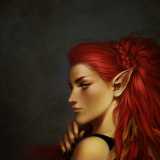 haha you know what, and they are also alot more ethical seeing as how your call boys end LMAO

“Now this , this is how I like to start my day” her smiles stretched across her face as she watched the dumb face of the hostess who forgot her name. There was nothing like making people pay when they did wrong especially wrong to her. It had been a long week, she had been away from the super sevens head quarters for a while focusing on the spotlight part of her career. She wasn't really a fan of the modeling and promotional gigs but it kept a fat stream of steadfast cash into her bank account. Turning the television off, she rolled over, so more sleep would be nice, even though she was in control of her own schedule she rarely got time to sleep and relax . BOOM! She bolted up right , What in the fu!k was that! She yelled out. She already knew it had to be Barbie, she could hear her thick southern accent screaming downstairs, each drawled out syllable irking the hell out of her. She ran her hands through her wild wavy red hair throwing on a pair of shorts and tank. Walking downstairs she heard all the commotion going on, walking towards where the sound was coming, standing outside the door she saw Super something screaming at Dmann and Barbie. Looking at the scene was positively appalling, Dmann was holding Barbie for something and Barbie's boy toy was in the back dead with what looked like internal bleeding.

Looking at Super Chick, she tried to make her face as little annoyed as possible. Why would you yell at people that they need to shut up, when your yelling yourself?thanks for making the situation worse” And just as soon as she sa id that, Barbie exploded on Dmann, completely going all out on him. It took all Ember had not to just personally hit each one of the people in the face, but instead she turned around and left knowing that that would do no good at all. It was so weird, being in a house with 6 other people who you barely talk to and possibly down right detest. Many times, she asked herself such a simple question “Why Do you stay?” “Why do you choose to help” I mean everyone in this place was mean, selfish, bitchy, and rude, so why where they on a super hero team. Its weird, because, its like they are living double lives. One thing was sure though, everyone in this house had their own demons, and they seemed to love to take it on everyone including herself.

Quickly, she went back into her room and showered getting ready. In no time, she was freshly showered, her wet hair in a high messy buns. She had on her favorite pair of distressed jeans and a brown tank to bring out the flecks of gold in her green eyes and the auburn tones in her hair. Grabbing some items she moved down the hallway. She had the whole day to herself, she was bored, and quite frankly fed up of living in a house full of screwed up powered superhumans. Reaching Attention Whores room, or rachels, she barged in. She STOPPED dead in her tacks. “Oh my...: her big eyes widened at the sight of Rachel about to do god knows what with some type of vibrating death contraption. Laughing, ember plopped herself in one of the large comfy chairs in her room, throwing a cover on her. “What happened to going out and getting the real deal , ?” taking out of her bag a bottle of nail polish she proceeded to paint her nails, unaffected by the scene. “Before you absolutely freak out, let me just say this house is f!cking annoying and you cant deny that fact! Im bored as freak, and dont enjoy living with strangers who are liable to snap any moment. I don't need a friend, ive got enough of those. But damnit someone in this house who I can confirm is not a fucking lunatic!, so ..after that..whatsup?” she continued to look down making sure she didnt go off the nail.