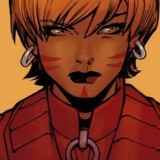 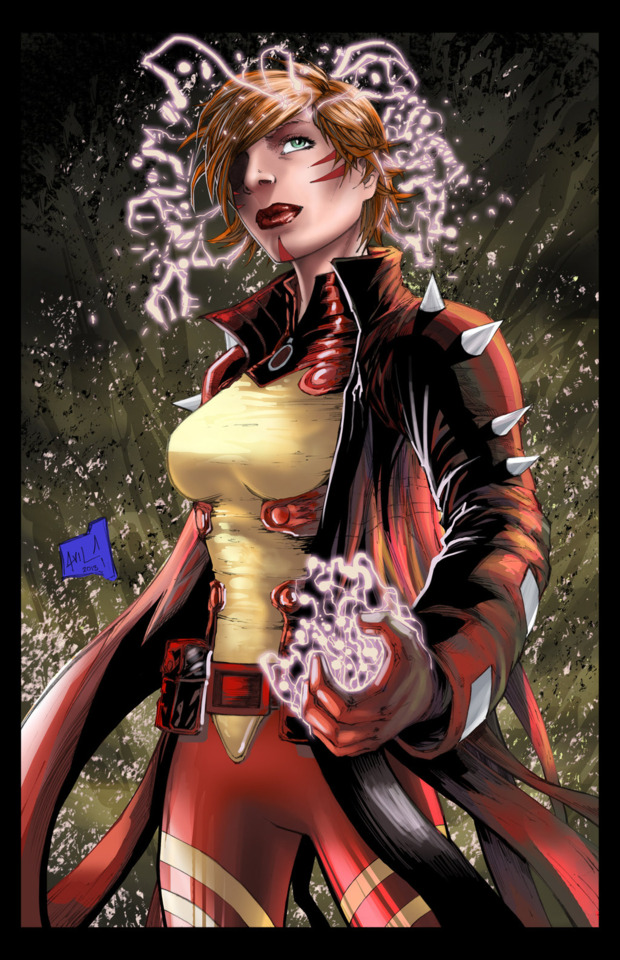 In the year 1993, a man named Guy Geller gained superpowers when he threw himself in front of an exploding fusion reactor, in order to protect Stacy Lane, the love of his life. Following this, Geller became Giga-Guy, a world famous superhero with a notoriously poor secret identity; and also married Miss Lane. Eventually, Stacy fell pregnant, and her husband was forced to retire from the penniless career of a superhero in order to provide for his family, deciding to become an actor as he immediately began production of a film based on his exploits as a hero.

On the fifteenth of August 1997, during the premiere of 'Giga-Guy: The Movie', Stacy went into labour. It was during this time that it finally became clear that she was bearing the child of a superhuman, as during child birth the woman gained enhanced strength and generated a vast amount of heat. As their daughter was born, the Gellers soon noted that the baby seemed to possess no extraordinary abilities of her own, with tests confirming that she was an entirely normal human being. In fact the only genetic anomaly the doctors found was not any hint of superhuman abilities, but instead cystic fibrosis.

They named the baby Esther.

For much of her childhood, the girl's condition was a source of great stress for herself and her parents. Particularly early on there was always the concern that it could lead to her premature death, though this became less of a worry as time went on. Eventually, Esther began to adapt to life with cystic fibrosis, relishing the fact that her poor digestive system required far more unhealthy foods than the average diet; whilst somewhat begrudgingly starting an exercise routine, which in her early life consisted mostly of gymnastics and swimming, though currently has been reduced to running and cycling.

Decades ago, an incredibly powerful mutant known as Jupiter began to gather a group of followers. These people, known as Jupiter's Rings, were mutant supremacists, who believed that not only were mutants superior to humans, but that they in particular were the superior mutants. Not only should mutants inherit the Earth, but the Rings should rule those mutants. Jupiter instituted a rule that members could only breed with other mutants within the group, in order to produce exponentially more powerful mutants. As the worship of his followers inflated his already massive ego, Jupiter's reasoning for this selective breeding began to shift to a more selfish ideal. He wanted an heir. For years he bred his followers in an attempt to produce a woman with a power worthy of bearing his children. Eventually he found that woman. A girl was born to one of his subjects, a remarkable girl they named Venus.

Then other stuff happened, yada yada yada, it's not important.

Jason is a mutant with the ability to manipulate the fundamental forces of nature. He doesn't yet realise the full extent of his powers, so any undiscovered applications will be covered by spoiler tags. I'm listing them here so no-one can get angry if he discovers them in the middle of a battle.

Gravitational: The first of his powers Jason discovered, it is used primarily as a form of telekinesis. He has total command of the gravitational force, though obviously the larger the mass of an object, the more difficult it is to affect its gravitational field. So manipulating the gravitational pull of planetary objects is technically possible, but incredibly difficult and would require an extraordinary amount of energy.

Electromagnetic: The most basic manipulation of the electromagnetic force, Eclipse is able to generate, absorb and control electricity. He does not have a limited supply of electricity, though generating it requires some mental exertion and thus it is easier to simply absorb and discharge it, or manipulate already existing electricity. The greater the power, the more difficult it is to control, hence summoning a lightning bolt takes more energy than creating a spark, though it doesn't take as much energy as creating a lightning bolt. The second major application of the electromagnetic force is manipulation of magnetic fields. Like electrokinesis, this can be used on both micro and macroscopic scales. This power gives rise to many applications:

Strong and Weak Nuclear: The ability to manipulate the forces responsible for regulating atoms provides Eclipse with perhaps the most devastating and powerful uses of his abilities. The focus is particularly on particle manipulation. This is an incredibly complex and dangerous use of his powers, as one could accidentally split an atom. Theoretically, Jason could reshape matter in any way he chose, but he is not experienced enough at this. There are, however, a few specialised forms of matter manipulation he is capable of: