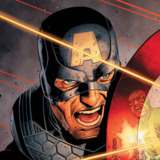 O'Connor was born in Long Island, New York as the only son of Esther and Bernard O'Connor. At the age of seventeen, he enlisted in the United States Army and by the age of twenty, he began training in the U.S Special Forces at Fort Bragg, North Carolina. O'Connor served eight years in the Special Forces and fought in the war on terrorism throughout that time. He became a gifted soldier and made a name for himself in the military through conspicuous gallantry and valor above and beyond the call of duty in action against enemy forces, keeping with the highest traditions of the U.S Army. For heroism in the line of duty, he was decorated with the Medal of Honor, the Distinghished Service Cross, 3 times the Silver Star and Bronze Stars, 4 times the Purple Heart, and the Presidential Medal of Freedom. After serving eight years in the Special Forces, O'Connor was recruited by the United States Army Special Warfare Command, an elite force tasked to take on superhuman threats. Like every new member of the Special Warfare Command, he was put through an intensive physical and tactical training program, teaching him a plethora of tactics, including extensive survival skills and rigorous combat training, beyond from most military branches. Through constant training and experiences in war, O'Connor slowly became a One-Man Army, having his natural abilities near-superhuman, thus possessing the traits and attributes of a super soldier.

The Henoshan war was a violent war that O'Connor fought in where the United States Army assisted the Henoshan freedom fighters in their long-standing war against the communist military regime, led by the country's dictator, Nam Drakhart. The war became known as one of the most violent wars in human history, as the war consumed nearly all of Henosha, with the entire country being the target of repeated bombings, defoliation, and countless battles taking place every day. Soldiers from both sides were exposed to hostile fire and the mutated life, affected by the radiation given off from nuclear bombings, that lurked in the jungles. The United States lost 52,000 men alone, while the Henoshan military lost 1.1 million soldiers and thousands of civilians were killed in a nearly three year period. However, despite the horrors of the Henoshan war, the U.S military ultimately succeeded. Five months after the United States interfered in the long standing civil war in Henosha, O'Connor was involved in a covert mission, along with a designated team of allies each from a distinct organization, to seize the dictator's nuclear weapons. Not only was the team able to complete the task, but with the help of the men involved, O'Connor managed to kill Drakhart as the secret mission turned into an open battlefield between the team and Drakhart's forces. After the dictator's defeat, O'Connor continued to serve in Henosha for the rest of the time that Drakhart's army continued to fight against outside forces supporting the freedom fighters, nearly three more years.

After the war in Henosha had come to its end, the Special Warfare Command kept full attention on its government, in order to prevent anymore corruption or another dictator from rising to power. However, there were other conflicts throughout the world that the military branch was unable to interfere in, since the Special Warfare Command was tasked with many duties concerning Henosha. Due to the state of the world and the organization's desire to bring peace, many members of the military branch agreed to enlist one of its most effective and honorable soldiers, Joseph O'Connor, to S.T.R.I.K.E.

Due to his time in the military and his intense training regimen, O'Connor's bodily functions are at the very peak of human condition in almost every way. As a daily routine, he bench-presses 544kg/1200 lbs and leg presses 1130kg/2500 lbs, which enables him to use almost every muscle in his body while under human conditions when the average human uses only 30 percent of it, which means that his overall strength surpasses that of an individual with peak human strength. Although he is considered to be in peak human state, the amount of strength he possesses goes beyond. He is strong enough to punch an individual through a brick wall, agile enough to climb the tallest of buildings, leap to high feats into the air and distant yards. The war veteran can also tolerate large amounts of physical pain that no ordinary human can take such as being shot or stabbed repeatedly, burned with high heat, and beatings that a normal person would not handle. His training has led him to be extremely durable, much more durable than an average human.

O'Connor is an expert in operating various types of war machines. He is proficient in operating tanks, jets, helicopters, motorboats, submarines, and armored vehicles. He is highly skilled with almost all types of melee weapons and firearms. O'Connor is incredibly proficient with many types of weapons, being able to use any weapon he finds in the field, including Kalashnikov Variants, M16s, Hunting Rifles, and Various M60 variants. His size and strength allow him to carry machine guns that are generally crewed by three soldiers, such as a .50 Browning machine gun with accompanying 50 lbs. ammo, without the aid of a turret, and still endure the powerful recoils.

The war veteran is an expert in hand-to-hand combat, being very skilled in multiple martial arts through his training in military combatives and instruction under various private instructors. The soldier has mastered several martial arts, including wrestling, Judo, boxing, Muy Thai, Sambo, and Ninjutsu. His fighting skills combined with his high amount of agility and superhuman strength make O'Connor one of the most deadliest fighters in the world and has been able to hold his own against superhuman individuals, despite his lack of powers.

O'Connor is skilled in all forms of special operations included but not limited to, Counter-terrorism, Guerrilla Warfare, Direct Action, Counterinsurgency, Assassination, Close Target Reconnaissance, and many others. O'Connor knows the science and art of organizing a military force, and the techniques for using weapons or military units in combination for engaging and defeating an enemy in battle. combining his military knowledge and his high level of physical ability, he creates completely new possibly unbeatable methods of special operations. He is a survival expert in almost any terrain, especially in jungles and dense forests. O'Connor is also an expert in guerrilla warfare, and is easily able to camouflage himself, nurse his wounds, create improvised weaponry, and build hand-made human traps.