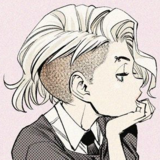 Katie's head jerked as though she'd just received a shock in the neck.

What the flip!? Who's the one being interviewed here? That doesn't...

Something sudden and forceful prodded her in the back, shoving Katie off balance. She turned around, clenched fists, and came face to waist with a tan-skinned man who...Was he another reporter, or some kind of moderator or plant?

"No one's here to watch some blogger bicker with a CEO, if she wants to give you the exclusive then you'll get it. Until then wait and see if you're called on again."

The others seemed to take that as their cue and began shouting and waving wildly for attention, drowning out the lone child's protests. She glared up at the man. Human or android, she was sure she could make him regret that, were it not for her cover. Although Katie didn't identify as a hero and hadn't assumed an alter ego, she was none too keen on revealing her powers to anyone apart from her mom. And if something went wrong she was far too terrified to risk another incident like last time.

Well, maybe if she thinks she's so superior then I can get that exclusive, she thought, not particularly hopeful about the prospect. It'd take a lot to swallow her pride and ask for one. But with the right approach, maybe...

"C-can we talk about that exclusive!?" she tried to shout over the crowd, but remained uncertain if she'd been heard even in the front row. Well, closed mouths don't get fed. She let herself be absorbed in the chorus of voices, already drafting the next approach in her mind.

I swear to God, these fecking corpo bitches and their fake oblivious—"It's not about the 'ethnic group,' it's about you saying we 'defiled the planet' along with everything else!"Feck! She did it again. Lost her cool. But seriously, these fecking corpo bitches need a new playbook because I am so sick of the "I feel attacked but I'm gonna pretend I didn't just say something incendiary" move. It's played out.

Then stop falling for it, her inner voice replied.

But, she thought, she still had another angle. Following up quickly so that no one else could interject before her, she stood her ground but resisted the urge to take another step forward. "Not frightened, I think it's fascinating," she said, aggressively diplomatic and becoming more smug. Comfortable in what she saw as an absolute checkmate. "I'd love to do a deep dive interview about H.I.V.E. as a whole if you get the time, lots of questions, as I'm sure we all have. But just anoth—So you say androids are a whole ethnic group. And you sold them all over the world? Manufactured them for the purpose of unpaid labor in homes, the service sector, dangerous jobs like construction and mining...sex work? With no freedom whatsoever, profiting off of what some might call—based on your words—the same as slavery. Can we just get a comment on that?"

All the while she maintained that smug, fake-innocent grin, reflecting exactly what she assumed women (entities?I guess a robot like her still has gender expression) like Zedora and Elsa Beremud felt when they turned Katie's questions back on her.

Of course, no one could deny it'd been earned. Amanda had been the number one correspondent covering meta and meta-adjacent activities for so long, it felt like she'd been there from the very first. She sought recognition covering a highly dangerous field, one previously filled with puff pieces and false feel-good narratives, placing herself in the heart of certain death, and it served her well. If anything she was an inspiration. Katie could stand to wait for Amanda Hugginkiss.

Especially since Zedora's response to her question opened the door for the Ethusalia survivor to have her own moment. Butting her way to the front (quite easily considering her deceptive strength made her capable of tossing a full-grown man an entire city block), she threw her hand up and waited to be called.

"Katie Kurtz...er...Halberstadt...Kurt-Halberstadt—Yeah, Katie Kurtz-Halberstadt, independent journalist."Wait, do they usually introduce themselves in real-life? Did Amanda do that? Frick, stupid dumb bitch, just keep going! At least she didn't use the word "blog" this time.

She tried to keep her cool and be careful with her words, remembering what happened the last time she tried to ambush a powerful corporate woman with hard-hitting questions about semantics and metahumans. "That's a lot to unpack. 'Defile the planet?' That could be interpreted some seriously charged language. Along with that, your statement regarding the other machines in Valor and this...'3rd Society?' could be interpreted as a call to arms. Who or what exactly are you trying to reach, and for what purpose?"Don'tsayitDon'tsayitDon'tsayit..."Like, I'm not gonna wake up to find out my toaster's run away from home, am I?"

While self-awareness is admirable in theory, a self-aware moron has no excuse to continue being a moron. Further commitment to moronism should be treated as deliberate and thus worthy of even more contempt than morons without self-awareness.

I know just enough about policing language to know that that newscaster should be fired for describing a criminal as "prolific!" Gotta use words that sound nasty! No exceptions.

Katie rolled her eyes beneath the mask. "Well duh, nobody's perfect, any twelve year old knows that. But I've been—wait, why am I...I told you I'm not trying to be one of you. Stop that!" Geez, good thing he couldn't see her face. She was sure she would've been bright red. Although, not wanting to appear the quitter, she crossed her arms defiantly and added, "I'm still gonna keep practising - like I was - but not because you told me to or I'm trying to be some sort of glory hound 'hero.'"

He was just trying to be helpful...even if she did think the idea sounded ass-backwards. But his production of the camera finally swayed her to, at least outwardly, change her demeanor.

On Youtube. Of course. Glory hounds, like I said. So he wasn't a total asshole. She was definitely gonna dig as deep into his archive as she could, but maybe not throw all his business out there. And he had experience, and obviously some resources behind him. He could still help her in other ways. "I...don't have a name," she said, lightening up considerably. "Like I said, I'm not a hero. I just sewed the suit together so I could keep myself secret while...doing other things. Like this. So I haven't given it any real thought. Hey, speaking of 'this,' how'd you capture your footage? I don't see you toting around a hefty bag or full gear...something in the eyes? Is this all P-O-V?"