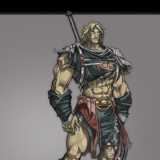 WW has way more feats but current He-Man was able to kill a perfect clone of Superman. He was able to also tag a blood lusted Flash controlled by Skeletor... Skeletor was able to solo the Justice League (although he studied them, its still a huge feat) He-Man fights on par with Skeletor, almost always besting him in battle. You may ask what this has to do with WW vs She-Ra, well in the future, He-Man becomes corrupted with power, and She-Ra was strong and fast enough to kill him pretty easy. The same He-Man that killed the clone Superman and knocked out the Flash. She-Ra herself has been mortally wounded by Hordak, but her sword of protection can stop death and heal wounds instantly. Her sword can also turn into a huge shield of protection that was so powerful it was able to kill off the Dark Riders, and the Dark Riders are basically spirits, that can not be harmed or physically touched.

I agree to this. And in the Eternity Wars Series we never got the full extent of her power. But it does bring to light the source of their power.

Where Wonder Woman is demi god and does have a limit to her power. Where as She-ra gets her power from THE SOURCE OF THE UNIVERSE!

I still stand by my debate that there would be a difference to Military tactics of the amazons, who have NOT had a real threat or opponent to their home for thousands of years, where as The Horde, had to adapt tactics and fighting styles to combat thousands of races in order to defeat and subjugate them. As well as later learning how to use guerrilla style tactics from her time in the rebellion.

Even if, somehow She-ra was weaker in strength (which ill never admit); The fact is She-ra knows how to deal with experienced warriors with greater strength. usually by disorientation of the senses. Flash bombs or something to slow down or stop wonder woman from going on the offensive. Put her in a position where she would have to be on the defensive then manipulate her based on her remaining senses. She is still vulnerable to piercing attacks.

again depending on the setting. if set in a forest or jungle. her advantage is to be able to get animals to aide her as she has done in the past, both present series and previous. The major reason why she easily defeat king he-man was because Prince Adam did not have the same warrior training Adora had. so advantage in combat was her.

Personally Id like to think its close but my bias wants She-Ra to win. as she is backed up by the fires of eternity that created the universe.

sorry guys got locked in the bathroom for..... 2 years..... and ive kinda fallen behind on what has been going?

I noticed some changes to the forums slightly but over all have things changed much in the past couple of years here?

Based on the open endedness of the series that is obviously allowing for new characters to be made. Are you hoping if DC decides to continue the He-man or She-ra comic series that they introduce their own characters to the He-man series? Personally I think it would be great if we get new blood into the mix. As well I hope they expand on she-ra some more as well.

He-man would kick his butt.

1. They did something similiar with Doc Ock taking over peter parkers body. yeah he clean sweeped peters head but peter still came back. there is going to be a part of bruce inside of him that will drive him to become batman again.

it has my interest.

This is who I would have done for casting of Batgirl. Nothing against their casting. But this is someone ive seen give grit on screen before and is a red head.

Rose Leslie, AkA: Ygritte from Game of Thrones.

Its about time. To be honest, Cyborg represents the hero for the modern age / future. especially when it comes to technology and our usage of it. I am picking this up regardless.

Lets look at the facts here. You need Anarky to be against big corporations. the best way to do it. is eventually have a big company screw him over in a job by having him caught and don't bail him out. revenge story right there but they want to give him an origin.