I understand this is a comics site. I love comics. But I also love video games. And it's great when those things get to cross over. So, over the next week I will be doing comprehensive reviews on a video game that inspired several comics and a couple of video games that were inspired by several comics. The first is the video game that inspired some comics and as many of you know, especially since there are a few ad banners floating around the site for it, that game premieres today and is called Halo 3: ODST. 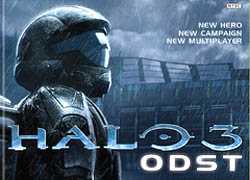 With hundreds of possible stories and battlefronts out there, it wasn't hard for Bungie to continue to expand the already infamous Halo canon. With the exploits of Master Chief well documented in the intergalactic struggle against the Covenant, many people forget that this war is fought on many different fronts and has been ongoing for decades.

One of the newest battlefronts is Earth, the last great human stronghold, and recently discovered by the Covenant. So while Master Chief is on the other side of the universe, the war is still going on and has finally hit home. 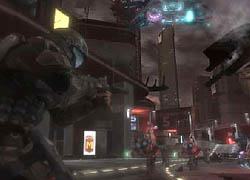 This is where the ODSTs come in. Labeled for their preferred form of being dropped into battle from their space cruisers, the Orbital Drop Shock Troopers are the best of the best (aside from Master Chief, of course).

Taking place during the time between Halo 2  and

Halo 3, Halo 3: ODST (labeled such due to the game using the Halo 3 engine and the inclusion of the Halo 3 multiplayer as well) follows the story of a squad of ODSTs as they race against the Covenant for an artifact in the city of New Mombasa in the East African province (Kenya in real world terms, I believe).

Your main character is simply know as "The Rookie" as you are introduced to the rest of your squad in the opening cinema before you drop into battle. When you arrive the Covenant assault is well under way. After launching from your cruiser to counterattack, a Covenant drop ship warps in and the ensuing shockwave scatters your squad throughout the region. After waking up about 6 hours after crash landing in New Mombasa, how you view Halo is forever changed. 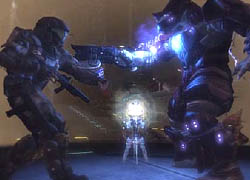 There is still your typical run and gun first-person shooter mayhem and plenty of opportunities for it, but there is also a tremendous new detective and suspense element added to the game. As the Rookie, you befriend an A.I. program called "The Superintendent". Simpler than Cortana for you Halo vets, the Superintendent still is critical in your mission as he helps tell you the story of how New Mombasa fell and point you in the right direction as he uses street signs, car alarms, ATMs, and other civic devices it can control to steer your path.

After befriending the Superintendent, you put your detective skills (and some sweet night vision goggles) to use as you search New Mombasa for clues to the whereabouts of your squad mates. As you find more items belonging to your mates, from your Captain's helmet to your sniper's rifle, you begin to piece together what happened when you got knocked out, all the while exploring Bungie's largest sandbox environment to date.

The most exciting new aspect of this game comes when you find each item because you actually get to see through the eyes of your other squad mates to see how the items came to be in the condition they're in and to see the battle unfold. This ensures that you will play as every member of your squad at some point to experience how it feels to be a sniper, a demolitions expert, a heavy gunner, etc. and to see how the full story of the New Mombasa post-invasion unfolds. 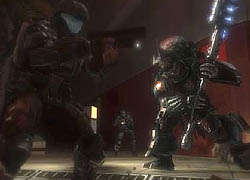 With that said, there is also plenty of your old favorite activities returning like hijacking Covenant Banshee or Ghost ships or hopping onto the turret of a UNSC Warthog. There are also randomly generated fights against the whole spectrum of Covenant foes as well as all your favorite weapons being available again from sticky grenades to swiping a downed foe's Needler.

I will admit to not being obsessed about the Halo series as much as many other people, but I could not put this game down. It only took me about 10 hours to beat the campaign mode, but the time flew by and I was left wanting more.

The graphics are beyond beautiful and the music helps set up an almost film noir, classic detective story kind of feel that you just don't see nowadays, especially in a futuristic game like Halo.

There isn't a lot to bring you back to the campaign aside from the Superintendent audio logs, but the new Firefight mode, similar to the Gears of War Horde mode, with endless waves of enemies as you try to improve your score and the included Halo 3 multiplayer will keep most Halo fans happy for a long time to come.

In the end, my only complaint about this game was that it ended too soon for me. Although 10 hours of gameplay is about the norm for most games nowadays, I just didn't want it to end. I wish I had 20 ODSTs in my squad and that I was still searching for more of their items. This is a must have for any Halo or first-person shooter fan.

Graphics: 10.0: I don't know how they could make this game look more gorgeous. The graphics really helped stress the mystery the game was trying to go for and were spectacular.

Audio: 10.0: The music might set the mood even better than the look of post-invasion New Mombasa. When music can help draw emotion from the player, it has succeeded and this soundtrack does that. Add in the typically strong SFX and great voice acting from all those involved and I can't dock any points for this.

Plot/Plot Development: 10.0: The plot fits in perfectly with the Halo canon and the way the game leads you along through the different areas of New Mombasa as you search for your squad mates and try to unravel the sub-plots of the New Mombasa invasion makes this one of the more engrossing games I've played in a while.

Gameplay: 9.0: The game is glitchless. The controls are relatively natural, but I had some difficulty driving several of the vehicles you get to control at separate points throughout the levels and they felt a lot less natural than when you are on foot.

Replay Value: 7.5: Not wanting to take away from the Halo 3 community, ODST doesn't support its own original multiplayer and the Firefight mode is really just Horde mode from Gears with a Halo twist. Add in a minimum of collectibles for campaign mode and you have to figure that Halo fans will still be thrilled about this, but more casual fans will probably see this as a one and done.

Overall (not an average): 9.5: Minor complaints aside, this is one of the best games I've played in recent memory. I'm starting to form my game of the year predictions and this has to be in the conversation. The story was brilliantly done and the peripherals are perfect. I wanted a little more in terms of replay value, but overall this game is top of the line.

P.S.: I don't know why some of the text is in italics and some of the spacing is off. I try to edit it and it won't work so I'm just giving up and leaving it at this point. HTML is so much easier when it comes to posting stuff to the web.
Start the Conversation
Load Comments