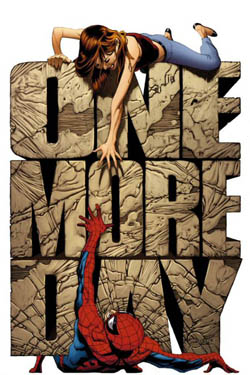 There are a bevy of articles that I owe the geek community right now. I should be writing about Marvel: Ultimate Alliance 2 or Batman/Superman: Public Enemies (both are on their way, I promise!), but this last Wednesday, like every Wednesday, I headed to my local comic retailer (Time Warp Comics and Games, 555 Pompton Ave. in Cedar Grove, NJ, 07009. Give a shout out to everyone there) and saw something that needed to be addressed. As I thumbed through the regulars from my pull list, I saw something on the shelf that renewed a fire in my belly I had long since let die down.

After the One More Day Spider-Man story arc, my frustration with Marvel and their treatment of the web head had reached an all-time high. One of the sloppiest re-launches in history had just occurred with Spidey (more like a lobotomy) and almost everything my generation had known and loved about Spider-Man was flushed down the drain along with the fact that Marvel had painted themselves into a corner...again.

Instead of letting the old crone that is Aunt May just die, especially after a séance with Madame Web confirming that Aunt May was at peace, and having Spider-Man take Mary Jane into hiding just like Luke Cage did with Jessica Jones, they have Spidey sell his marriage to Mephisto in order to push the reset button. Every "mistake" that Peter Parker ever made was changed and about 400 issues of continuity were erased.

It was at this instance that I boycotted everything having to do with Spider-Man (except New Avengers, but if Jessica Jones mentions one more time she had a crush on Peter Parker in high school, that is being added to my boycott list as well). I wouldn't even play as him in Marvel: Ultimate Alliance 2 except in the beginning when you have to. I accepted that my favorite Marvel character was dead to me and that maybe it was time I grew up a little and cut down my weekly comics list. 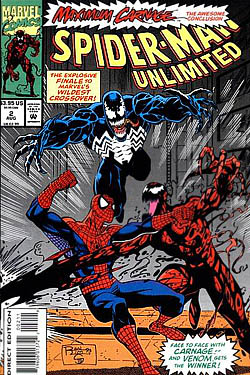 Now, since I've boycotted everything past the first couple of issues of the re-launch (they made Mary Jane a superhero for cryin' out loud!) I don't know if anything has been resolved because I haven't read anything, but a small part of me died, much like the small part of Peter Parker that forever knows his greatest mistake was giving up his love for MJ.

My two favorite super-heroes during my early years, like many people in my generation, were Batman and Spider-Man. I believe many people love these characters because of their humanity. Batman in more literal terms, Spider-Man in more figurative terms because even though he had super powers, the gamut of emotions and struggles he had to deal with hit close to home for many of us.

I like to believe they also gave us the most hope. Batman helped us believe there was always a way out of every bad situation as long as you properly prepared yourself. Spider-Man gave us hope because even through all his pain and torment, he still found true love and also found ways to persevere.

This re-launch destroyed Spider-Man in such a way that I can't look at him anymore without feeling hate in my heart because I can't relate to a reset button no matter how hard I try.

With that rant out of the way, I go back to why this seething anger and hatred resurfaced months after the initial offense and ensuing boycott. While at the comic store, I noticed on the shelf the first issue of a six issue miniseries. It was the start of how Spider-Man's infamous Clone Saga SHOULD have played out and it opened with a one page, heartfelt apology from the folks behind it.

I nearly ripped the issue to shreds on the spot, but, for once, a cooler head prevailed and I placed it back on the shelf with no incident.

In my life, the Clone Saga was the first destruction of Spider-Man. At the time though, it was a more forgivable sin for me because I was a small lad and my knowledge of Spider-Man comics was limited to what had inspired me to read Spidey's comics, the Maximum Carnage arc (which is still the best Spider-Man arc I ever read).

The thing that fueled the anger was the fact that 20 years after the disastrously drawn out plotline, Marvel admitted, in print, to one of their greatest mistakes. As a fan, it was like a slap in the face. An apology will not fix the two years of wasted paper and ink that the Clone Saga caused nor will it bring back any of the characters who were bumped off after the fan base started warming up to them (unless this most recent re-launch decides to do it all over again so this way Marvel can really stomp on our hearts).

I don't understand why Marvel feels it necessary to try to vindicate their mistakes by pressing the panic button whenever there is some negative backlash for their risk taking. I REALLY don't understand why they keep bringing these mistakes back up years after they have been forgiven in the collective consciousness only to re-open long since healed scars. All I know is I miss Spider-Man. I miss the REAL Spider-Man. The Spider-Man that I grew up with, that was married to Mary Jane, had to team-up with Venom every now and then to take on Carnage, and could still make some sweet wise-cracks. Get me Tom DeFalco RIGHT NOW!