Join the Dark Side

i just want to say something before continuing with my article. I have been accused of plagiarism on my own work on this site. Every thing I post anywhere on the internet is my own work and I have all the rights to it. In this case, I posted a video where I spoke with Joe "Mad" Madureira about his upcoming video game, Darksiders.  I have been given permission by THQ/Vigil Games to use the footage in this piece, and all the words leading up to the video are my own.  I joined this site in the hopes of being able to add my opinion to a group of like-minded people and provide some unique perspectives, as well as some unique content, to the topics of discussion on the numerous boards in this community. If I ever take material from another source, you can guarantee I will cite it. I hope this never comes up again, but let it be known I will not tolerate false accusations of any kind. My name is Ray Carsillo (Raymond Carsillo Jr. if you want to be specific), I am a web producer/reporter/columnist for 1050 AM ESPN Radio in NYC, a columnist for Collider.com, Examiner.com, and ESPNvideogames.com, and a Internet TV host for UBATV.com. I know comic books and video games and love talking about them and with others who like them. And all material posted to this and other sites is completely my own. Now, with that being said, here is my interview with Joe Mad. 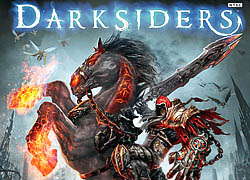 Joe "Mad" Madureira is known for his legendary artwork with his run on Uncanny X-Men. What many people may not know is that when Joe left comics, he founded his own video game company and it looks to be producing one of the hottest looking games of 2010.

Darksiders follows the story of the Four Horsemen of the Apocolypse and how War has been blamed for bringing about the Apocolypse early. Charged with clearing his name and finding the true culprits, you take over as War and use your awesome powers to fight your way through the ruins of the world on your quest for vengeance.

I had a chance to talk to Joe Mad at this year's Big Apple ComicCon as well as get a hands on with the game's early demo. Check out the interview below for more details on the January 5, 2010 release and some sweet footage of this sure to be action/adventure smash-hit.