HEROES IN A HALF SHELL 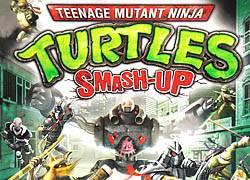 With this being the 25th anniversary of the Teenage Mutant Ninja Turtles, Mirage Studios and Ubisoft, who hold the video game licenses to the franchise, have been going all out with the shell-ebration. This includes a reissuing of some of the old 1980s action figures (which they were very kind to send me a Master Splinter figure; sweet!), a remake of Turtles in Time for the current generation of consoles, and the highly anticipated TMNT: Smash Up for the Nintendo Wii.

Now that TMNT: Smash Up is officially available; I want to take this time to analyze the first original TMNT game for this current generation of consoles. The basic plot of the game is that Master Splinter wants to hold a special ninjitsu tournament to see how far the turtles have progressed in their training. The prize would be any of the items of Splinter's trophy room. Of course, there is a catch. Splinter, Casey Jones, and April O' Neill are all going to be participating as well.

As the tournament progresses and a winner is about to crowned, the Turtles receive an emergency call from their old friend the Fugitoid saying he has been captured by Shredder. This is where you take over and progress through various fights before facing down Shredder and some Foot Soldiers. 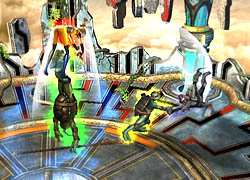 The plot is simple, as it should be for a fighting game. No one besides Shredder should be the final boss and the fighting mechanics are great. Ubisoft took the same fighting engine that was used in the Super Smash Bros. series so you can have four-player grudge matches and the game flows very smoothly. The game looks beautiful with some awesome settings and great interactivity in the levels.

There are still a few things nagging at me though being a die-hard TMNT fan. First, the generic background music irritates me to no end. Can we PLEASE bring back the 80s theme? There wasn't even the new cartoon theme. I'll even take the "Go Ninja Go" rap from Vanilla Ice at this point.

That isn't my biggest gripe though. My biggest gripe is that after being promised tons of characters, the list was suddenly shortened just before the release and instead of having hidden TMNT characters Ubisoft thought it would be a good idea to have three Raving Rabbids based on TMNT as hidden playable characters. WHAT?! 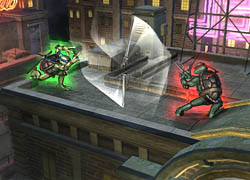 No Bebop, Rocksteady, Krang (although they might try to pull off the Utrominator as an upgraded Krang without calling him that), Leatherhead, Baxter Stockman, Rat King, General Kragg, Wingnut, Ace Duck, Usagi Yojimbo, Tokka, Rahzar, Slash, OR ANY OTHER BIG CHARACTERS WE CARE ABOUT! Instead, we got the Turtles, Shredder, Splinter, Karai, April, Casey and...that's pretty much it. There were more stages than there were playable characters.

The most important thing about a fighting game after the fighting system itself is the roster of characters and TMNT: Smash Up sorely disappoints on this front. The majority of TMNT fans are still those of us who grew up on it and not catering to us is always a bad idea. I was really surprised with this considering the great job Ubisoft did when revamping Turtles in Time, but this really depressed me as a hardcore fan. Instead of trying to use this game to promote another franchise, Ubisoft should have concentrated on making this as good a game as possible. 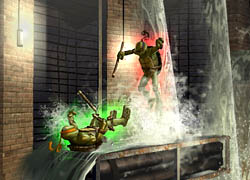 Graphics: 8.5: For the most part the game did look beautiful. Some of the settings were a little darker than I liked and when some of the large maps zoomed out to show all the characters on screen, it was hard to tell where everyone was, but for the graphics were mostly crisp.

Audio: 5.0: The generic background music irritated me and made me long for the good old days with the 80s theme song. The SFX were average and the voice acting was solid using the newest cartoon's voice actors, but they didn't record a lot of lines so they repeat themselves frequently.

Plot/Plot Development: 7.0: The plot is not usually the strongest point for a fighting game. All you need is a reason to bring a lot of people together to duke it out and this game does that.

Gameplay: 8.0: The fighting mechanics are very good and all the characters have unique combos and special moves to fit their styles. Add in special Ninpo items like daggers, smoke bombs, and some mystical items that randomly appear on screen and you'll have a solid fighting game experience.

Replay Value: 5.0: An arcade mode, survival mode, and mission mode all make the game worthy of playing, including a nice amount of unlockables, but with none of those unlockables being characters from the TMNT universe, I have to dock this score a lot.

Overall (not an average): 4.0: This game reminds me of the original Smash Bros. for N64 and if this was two generations ago, this would be a great game. Unfortunately, it's not, so this game is not nearly as good as what we've come to expect from fighting games. A lackluster roster takes a lot away from the game and severely hurts the game's replay value because there are only a few characters to go through the game with. The engine is great and that is the number one aspect for a fighting game, but everything after that falls flat on its face and any TMNT fan will be disappointed at the very least, if not furious, over this game. A more casual fan might want to rent this just to take a look, but probably not.

TMNT: Smash-Up is available now for the Nintendo Wii.