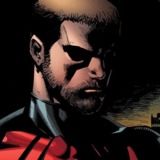 Let him live as Scarlet Spider once again in a monthly series.

Preston is in this?

The atrocious yellow boxes that Way introduced should never make an appearance. Yes, to my utter horror, many fans only know the Waypool and even sadder is the fact that even though there are countless posts instructing people to read the older (aka TRUE) material they don't since if they did Way would have 0 fans. Death will not make an appearance (even though it, er 'she', should) since ANY time you deal with religious iconography the ignorant, skittish masses shy away and Deadpool movies must appeal to the masses in order to make money and keep getting made.

As for what should be in. Domino is #1 and would provide a great foil to Copycat...er Vanessa. Domino is an amazing character and it is a mystery why she has not appeared on film yet :( Taskmaster would be a great addition as well and could be utilized in a variety of ways. Some of the best moments of early Deadpool was the practical joke playing between him and Blind Al so more of that is needed.

Best move for the sequel even though it will never happen is to introduce the new actor to play Wolverine. Jackman is done but wolverine is a money making machine and what better way to cash in on that than to introduce the new actor for Wolverine in an almost guaranteed smash hit movie perhaps at the end and lead that into a full-blown X-Force movie with Deadpool, Wolverine, Cable - throw in Domino just for kicks or Psylocke to further tie-in the X-Men movies, etc.

And again, NO CAPTION BOXES.

So... no Secret Six or Midnighter anymore, huh?