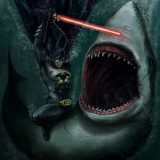 For an event comic, this is incredibly uneventful 0

So much has happened in the series. Multiple heroes have been killed, the world is controlled by robots, and the few heroes that remain are desperate to find a solution. And yet despite all of this, it feels like nothing is going on. The story moves a long at a snail's pace (Honestly the first three issues could have been reduced to one without much difficulty),and when a character is killed off, there's no depth to their death, and there is no meaningful reaction from any other characters. On t...

A bore of an event 0

Despite him being a big name at Marvel, I have never been much of a fan of Bendis. It's not something that I can quite pin down, but something has always seemed off with his writing, at least to me. So when I heard that he was writing the latest event comic for Marvel, I was, shall we say, less than enthused.So much happened in this issue, yet at the same time, it felt like nothing happened. We are introduced to the titular Age of Ultron, yet we are given no explanation of how things got the way...

A Valentines Day anthology from DC. Because there's nothing I need more than being reminded that I'm single...Anyway, being that this is an anthology series, I'll review each story individually.Catwoman and Batman in "Think it Through" - 2/5Pretty much nothing happened in this story. Catwoman sees something she wants to buy, she tries to rob something, and Batman stops her. That's it. There's no romance, there's no interest, it's just something that happens. The art is okay, but the story doesn'...

I haven't read an Avengers comic in a long time, as I'm not a big fan of Bendis. So when Hickman was announced as the writer' for the Marvel NOW! Avengers team I was really excited to start pulling the series again. He was blowing it out of the water with his work on the Fantastic Four, and I'm very pleased to say that his first issue of Avengers is equally good. The villains introduced were really interesting (Are they brand new characters, or am I just not familiar with them?), and they sound ...

7 out of 9 found this review helpful.

The premise for this series is very interesting. While comics always show what happens when a brilliant man goes insane, they never show the oposite. What happens when a supervillain gives up their life of crime?The dialogue of the comic was by far the best thing about it, and it really gives a good idea of Madder Red and the present day Fillmore Press, and it captures the mindset of an insane killer perfectly. He definitely has a lot in common with the Joker, but I think that this may change ov...