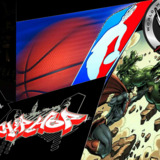 I'm sorry sir, I'm new here. I thankfully haven't been banned yet. I did know a guy who got banned once though. He pretty much jus...

@Knowledge_King: tanked and when something does no damage Thor was pierced every single time and slashed to so that is an endurance feat not durability feat learn the difference.

Her blades didn’t destroy a mountain it got lodged into so she could pull down a door big defense if her blades was the size as bullets or if bullet were the size of her blades the same would have happened to said mountain you talk as if her blades went clean through.

Balcony scene when she asked him what he was the god of again.

What else metal would it be? Lol also an arrow made of the same material would not pierce metal so easily. Vibranium never came in contact enough to pierce Thanos so what are you talking bout? Thanos skin was pierced by an Ironman punch come on now lol.

Being cut and brunch force slam is relevant for 2 reasons.

1. Because you claim he resisted light speed such and such which would require infinite durability going by your real life physics logic.

OK then let's say it clearly. Hela's blades cut through spaceships, and clean through other Asgardians and their armor. It did not go through Thor completely. It stopped on his chest.

Uru has always been specified. Mjolnir, Stormbreaker are Uru. Nothing about Sif's shield says it's Uru.

1. In Wakanda, the weird claw shield they gave him, broke on Thanos' stomach.

2. In Endgame, Cap's shield hit Thanos in the face a lot. It has cutting properties as it did cut vehicles like helicopters, and busted parts of Iron Man's suit, remember.

3. In Endgame, Cap had Thor's strength, Mjolnir, AND his shield, and threw it with full might and struck Thanos with it and...it only broke his helmet. He tanked it just fine.

Thanos' skin tanked Iron Man's petawatt laser btw. The same laser that cut through rock and steel like butter. It then tanked a bunch of missiles, a bunch of hits, and finally after all that, Iron Man drew blood. It was the point of the scene. Thanos also tanked Drax's knives and Nebula crashing a spaceship on him, without a scratch.

Not sure why you're using real life physics (that hasn't been proven btw) on something that doesn't apply. FTL would simply take a certain amount of durability, not infinite. Thor tanked it. Loki was never cut by concrete or...even by Vibranium. So that's not true, you kinda made it up.

@Knowledge_King: then he didn’t tank it it went in his chest thus it pierced so you have no point. It got lodged into a mountain and those blades were far larger then the ones that pierced Thor so what’s again moot point. Also add a bullet can go into a mountain aswell but not all the way through similar to her blades so moot point her blades are brittle as hell.

You haven’t answered the balcony scene where she so clearly pieced him so once again your arguments fall flat 🥱.

The arrow the fodder shot at Thor pierced Sif shield which was Uru.

To move at light at light speed requires infinite mass thus infinite durability to tank going by real world physics you see how this works?

Right so you’re wrong as hell. Anyways loki face had cuts and bruises from concrete his durability is trash tier like your debating prowes.

I say tanked, because he got stabbed and was still up and fighting until Hela threw him away...and he still was up after that.

Hela's blades quite literally destroyed a part of the mountain to reveal a hiding place. A bullet cannot do that.

I have no idea what balcony scene you're talking about. Thor took everything just fine and blasted her with lightning so...

Is Sif's shield Uru? Do we know the arrow isn't? If you can prove any of your claims you might have a point. Until then...Thanos's uru sword busted vibranium and Stormbreaker pierced Thanos when vibranium couldn't. So Uru reigns supreme for now.

As for Loki...being cut and being blunt forced slam have nothing to do with each other. Not sure why you're equating feats right now.

From what I saw between them...Namor. Because of the spear and he's faster. He can't match him in strength (unless M'Baku was wearing Vibranium) but, he should be able to win this with what he showed.

@Knowledge_King: that’s a feat for his armor not him and my point still remains on the balcony she pierced him clean. Also Hela blades are fodder aswell random arrows can pierce Uru armor not impressive

Bifrost shards are literally fodder loki tanked them same Loki who was bloody faced after being slammed on concrete by the hulk.

Thor's armor is pierced though. It gets caught on his chest.Hela's blades pierced a mountain. And a blackhole level ship. They're some of the strongest blades in movie fiction.

Bifrost shards move at FTL speeds, so automatically they're not fodder. Being slammed has nothing to do with being cut. Loki also survived a blackhole (the void). And a huge explosion (Bifrost).

Batman and it's not close. Goku hasn't used skill since his pre-Z days. The Z fighters literally struggled with a bunch of skilless androids, and Goku, while 30 million above Frieza in power level, had a close fight with someone who canonically never trained in their life. Goku literally had all the advantages and still struggled with an untrained person. This isn't even a competition.

Avengers stomp. Thor can solo. Hulk can solo. Iron Man can solo. Not sure what movie everyone else saw, but the JSA was straight up fodder.

Weakest? Between Domino and Daredevil, whoever you see as the weakest.