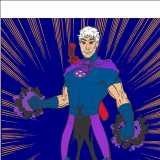 Marvel should release this. It would make my iTunes so much better. =)

I just realized that he had a LOT through the years. Maybe the most among the X-Men, excluding Wolverine normally.

Zelda, Polaris, Darkstar, Cloud, Infectia, Opal, Nurse Annie, Mystique, that girl he was dating when he joined the X-Men, that girl from another planet when he was in X-Factor. I'm pretty sure I'm missing someone.

I just found it curious to see how many he had and I didn't really noticed.

I'm surprised that they actually could make a more interesting character of him after losing his powers, I hope he doesn't get them back.

Which X-Factor would make a Good X-Men?

If i have to move one of the X-Factor to the X-Men it would be M.

She has come to be one of my favorites characters to a boring character that has no personality.

Multiple Man would beat Batman the hell up.

Madrox must surely will win in a fight with Batman.

Here are some of the quotes that I loved from Gambit and Rogue, sadly I didn't write the issue number, but anyhow.

Rogue: Remy, if you have any feelin's for me, any at all, leave me alone.
Gambit: S'funny. My feelings for you are the very same reason I'm staying.

Rogue: All ah ask, all ah need, is somebody to hold me. Stroke his fingers through muh hair. Promise me that everythin's gonna be fine... that all the cuts and bruises are worth it in the end. More than anything Remy... ah want that person t' be you.

Gambit: Where would you like t' go?
Rogue: Anywhere you do Remy.
Gambit: Now, y' sure thas how y' wanna phrase it to me, hon?
Rogue: Uh-huh.
Gambit: This is how i've wanted it t'be since I first looked at you, Roguie. Beyond all the flirtin' an' teasin', past all the games an' all the uncertainty. I know we can be hurt, girl. Physically as well as emotionally. I know one kiss from you, one touch flesh to flesh might give me some serious hurtin' but I'm willin' t' take the risk for you. You willin t' do the same for me?
Rogue: No.
Gambit: What is it?
Rogue: Ah' can't, ah want to, but ah can't. Ah'm so afraid ah might hurt you, like ah did to Cody when I was little an' kissed him, it was the first an' last time ah kissed someone out of passion, an' if ah kiss you an' if ah hurt you, ah know, ah just know, ah'd want to die.
Gambit: Then we don' kiss Rogue. Simple as that. Maybe thas' jus' fine right now for you an' me. Maybe we both have' t' learn there's more t' love than th' physical.
Rogue: ... ... ...
Gambit: Let me take those tears from your eyes, belle. Maybe this will work even better in th' long run, heh? Maybe we'll both end up learnin' what love really means. An'  can't think bout anyone else I'd rather try learn with, Rogue.

Rogue: Ah, the rationalizations of a former thief.
Gambit: Chere, what's this about "former" thief? I stole your heart, now, didn't I?
Rogue: You may have stole my breath away, cajun. Mah heart, sugah ah'm happy ta say, is still nice an' safe where it's always been.
Gambit: Under the lock an' key of a lifetime's worth a' hardship' non?

Gambit: Why don’ nobody know y’ real name?
Rogue: Why can’t ya tell me how ya feel about me?
Gambit:  Why won’ y’ ever let me show you?

Wolverine:  He’ll be all right, kid. There’s more to the Cajun than any of us really knows.
Rogue:  I love him, Wolverine.
Wolverine:  You don’t have to be a telepath to have figured that one out, darlin’. This thing he’s doing tonight he’s got to do it alone.  But after tonight, don’t let him be alone again. There’s somethin’ between you two. Mariko and I had the same. Don’t want to wait until conditions are perfect… cause with the likes of us, they never are.

Rogue:  How can ah ever love you… really love you… if ah can’t trust you?
Gambit:  An’ how can I ever love you, if I can’t touch you? We been here already, chere. We gone beyond it, I thought. Rogue, we been through plenty together already… our past, your powers, Sabretooth, Belladonna… so dis kiss is just one more hurdle t’climb over! You taught me more ‘bout love than anyone I’ve ever known… I wanna give some of dat back to you now. Please let me…

I have a lot lot more, maybe I could up some more other day. Hoped you liked them.
11 Comments

Wondering through sleep... who would i rather date... Rogue or Emma? hahaha

Just thinking about her future, we had been seeing how the writers are re-exploring her relation with Magneto... but so many years of hardships with Gambit, so she can go on and be with an old dude (ok, it's Magneto... not an old dude, but anyways...)
I don't know... =S

I'm new to the site, and i have to say it's just so damn entertaining.