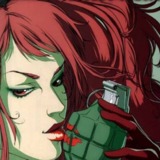 To modify a Rotblat quote, I have to bring to your notice a terrifying reality: with the development of nuclear mutation Mutants ... 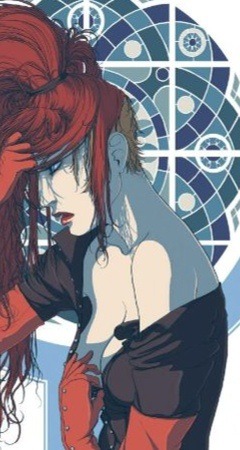 Powers: Telepathy: The ability to read minds by the use of this her reflexes are amplified. The mind picks up on neural messages for movement which makes her slightly precognitive in combat. Normally though in Azrayne’s sake however it’s just for interrogation fear centered purpose to give her a better strength against the low lives. Though a good telepath she was considered a runt amongst the VLA in telepathy regards.

Telekinesis: The ability to manipulate matter with her mind. The full extent of her capabilities are on the atomic level. Generally however she doesn’t use them to that degree, she originally used it on a low level. While the radiation allowed her to use it fuller she’s kept to the easier natural side. Her general uses were in acrobatics, shielding from harm, and popping limps back into place after otherwise impossible moves.

Radiation: Her mental abilities had been novice when her abilities first developed. Her truest mutant power deals in radiation or to be more exact nuclear energy. This can be used to emit types of radiation or detect said radiation. It can also be used to generate varying levels of nuclear explosions. These can be anywhere from small as a pin drop to bigger then a modern weapon of mass destruction. Through concentration she can emit just a emp blast but this is a little more strenuous on the body. This can also delve into toxins, because of this her blood saliva and sweat as well are considered irradiated and toxic.

Durability: Azra has the physical resistance necessary to endure being at the ground zero of a nuclear blast. Given this she can tank a large amount of damage inflicted upon her.

Weapons and Items: Often makes use of TK(telekinesis)+NE(nuclear energy) to construct potent blades. She also carries hollow grenades which she usually will turn nuclear. She also carries a series of throwing knives and a pair of vibranium kurkris

Originally Azrayne was just a girl born of a rather drug addicted mother and a political figure father, nothing special. Awkward family sure but nothing to really set her out of the ordinary. During high-school she began to learn of her mutant abilities a small level of telepathic and telekinetic powers mixed with the main mutation. A distinct ability to be able to detect and sense toxins and radiation, on top of that she could produce it with powerful effects. Azrayne was also rather rebellious believing in never abiding by anyones rule but her own. This is what would lead to her most common nicknames like Nukabtch or Duchess Nukem. Despite all this however the woman who bounced back and forth between red and blond hair was generally well behaved. She only acted out if someone had the audacity to tell her what to do.

This changed however when the war over VZ began. The growing conflict saw her family killed. Because of the propaganda like nature of conditional environments her mind was made up for her. Humans were the reason for her loss of everything. This was only further helped by her insistent nature of thinking law and order were bad things. With not much going for her the pyromaniac resorted to taking part in the ‘Spitfire games’ designed by Desiray Devinova aka Spitfire these games were a automotive sport. A series of races and stunts thats danger escalated do to the weapons put to use. It resulted in vehicular warfare in one of the most profitable but deadly endeavors.

Upon the restoration of Venezuela however the Venezuelan Liberation Army took interest in the thermonuclear mutant. She found herself enlisted into the Elite class not long after. Azrayne had a love for the training and conflict but not so much the ‘law’ element. Her abilities were also less then the others slightly which made her think herself the runt of the group. Her misguided thoughts, pride, and lack of regard for authority have made her a unstable element to say the least. Over the past months she had grown to be one of the most revered and feared being of the Liberation Army.

After a march into Washington DC the nuclear siren supposedly took her life in an attempt to level the Capitol. She recently has resurrected however, to what end remains to be seen.